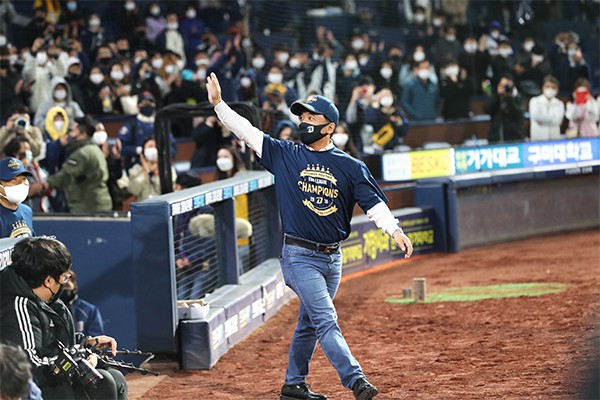 The Dinos, a relatively young team that joined the league in 2013, has remained one of the top-ranking teams in the KBO league, having reached the post season in every year but two. Behind the strong performance is the so-called ‘data baseball’ proposed by CEO Kim, NCSoft founder and an avid baseball fan who has spared no expense in reinforcing the team.

Kim and NCSoft celebrated the team’s first KBO title by lavishing gifts and rewards to players on all of its popular roleplaying games Blade & Soul, Aion Legions of War, and Lineage series.

The Dinos is famous for its data analytics system called D-Locker, a mobile-based tool that analyzes records and performance of every KBO players and keeps up-to-date statistics. The team gave 120 tablet devices to every player including the ones in the second-tier league to allow them to learn from the data anytime anywhere.

The team’s two big investments were also made based on the data analytics. It splashed out 9.6 billion won ($8.5 million), the highest in the KBO FA record in 2016, to sign Park Sok-min, and 12.5 billion won, the second-highest in the history of the KBO FA, to sign Yang Eui-ji in 2019. The two players have been leading the team’s best performance since they joined.

The Dinos was the first KBO team that allowed each player to use a single room during away matches in 2014, a luxury rare to most sports teams in Korea. Kim is also known to value veteran players to make the team one of the best teams that players want to play at. The team signed generous contracts with players in their late 30s and guaranteed coach position after retirement.

The regular season champion has earned a bye to the Korean Series which kicks off on Nov. 17.