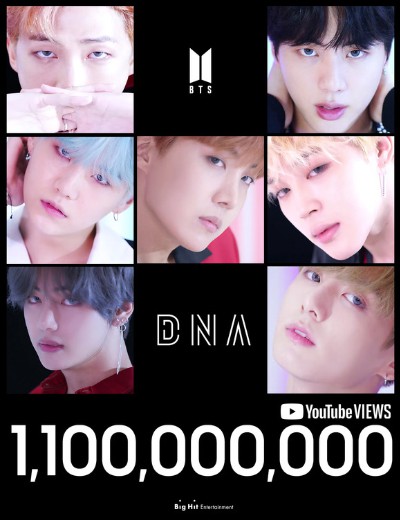 The boy group’s management agency Big Hit Entertainment said that “DNA”, the title track of “Love Yourself: Her” album released in September 2017, amassed more than 1.1 billion views at 7:28 a.m. on Monday.

“DNA” was BTS’ first song that entered the Billboard Hot 100 and stayed on the chart for four straight weeks. It reached the 67th rank of the chart.

BTS has 26 music videos that top more than 100 million views. Its “A Poem for Small Things” that surpassed 970 million views as of Monday morning is on track to become another BTS song to hit 1 billion views.

The track was created based on the same name song by Webstar and Young B that he danced to when he was first learning how to dance. He teamed up with American Singer Becky G who wrote Spanish lyrics.

The song debuted at No.81 on the Hot 100, becoming the first BTS’ solo track to be placed on the chart.