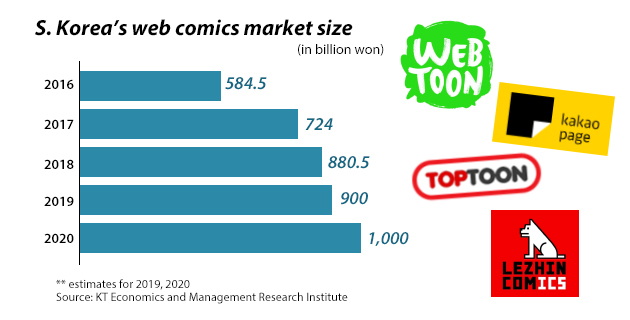 이미지 확대
Webtoons have joined the K-wave power with the contents eying revenue of 1 trillion won ($855 million) next year, a local study showed.

According to the KT Economics and Management Research Institute, the total value of Korea’s webtoon market is estimated to reach 900 billion won this year and 1 trillion won next year on its rising popularity at home and abroad.

The growth is mostly led by the fast rise of mid-sized online publishers, experts said. They grew fast to secure comparable dominance to those run by the country’s top internet giants in just five years of operation with focuses on contents for adults with purchasing power and efforts to enter overseas markets.

Daewon C.I. Inc., a comic publisher that introduced popular Japanese manga series Slam Dunk and Pocket Monsters to local fans, is one of the startups that grew fast amid the booming web comics market. The company that had struggled from losses amid slowdown in the printed comics industry over a decade successfully propped up its corporate value from 2.5 billion won in 2012 to 75 billion won as of 2019 with 130 online cartoonists since its entry into the online market.

Lezhin Comics, founded in 2013, also has emerged as one the country’s leading webtoon platforms in just six years with the number of contents of 946, chasing the industry’s No. 1 Naver Webtoon with 1,025. With efforts to enter overseas markets, the Korean publisher generated 10.5 billion won in revenue last year in just two years since breaking into the U.S. market.

About 40 percent of all domestic online publishers have an overseas unit currently to service their platform to the foreign audience.

By Park Eui-myung and Lee Ha-yeon