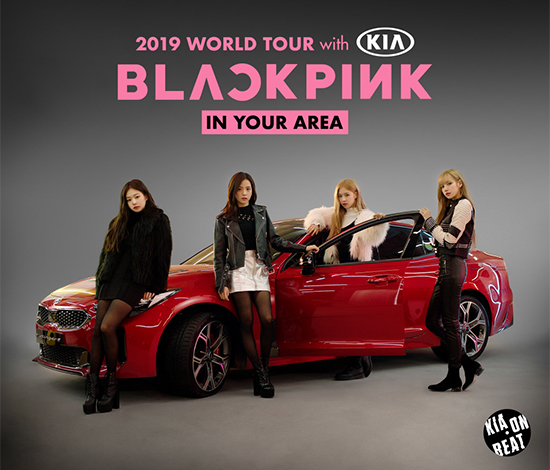 Kia Motors, a sibling company of the country’s largest car maker Hyundai Motor Co., said on Thursday that it signed a partnership agreement YG Entertainment that manages a number of well-known Korean entertainers in Asian and some other parts of the world including the four-member girl group BlackPink and boy group Bigbang to carry out cultural marketing campaigns on a global scale.

As the first project under the partnership, Kia Motors will serve as the title sponsor for BlackPink’s 2019 World Tour that will be held around the world including seven cities in Asia starting with Bangkok, Hong Kong, and Singapore this month.

Kia Motors will provide vehicles to BlackPink during the world tour and play a special promotional video featuring group members and its five-door compact sports sedan Stinger at the concert venues with hopes to promote the brand to a larger and younger audience.

Kia Motors will also create a separate exhibition zone outside the concert venues where it will display flagship models including Stinger and subcompact crossover sport utility vehicle Soul. The company will also provide different entertaining events for each city hosting the BlackPink concert.

“This partnership gives Kia a unique platform to engage with a young, trendy audience in several of our most important growth and volume markets,” said Cho Yong-won, chief marketing officer at Kia Motors. “While Kia is well-known for its sports marketing initiatives, engaging with popular culture is expected to help the brand further maximize our exposure to a younger generation.”

Kia Motors plans to launch diverse activities and experience-based events that allow artists to communicate with their fans and produce video contents such as those featuring K-pop stars driving Kia cars and road-trip interview clips. It will also manage Kia on Beat, a digital platform exclusively for global cultural marketing.

By Yong Hwan-jin and Lee Eun-joo