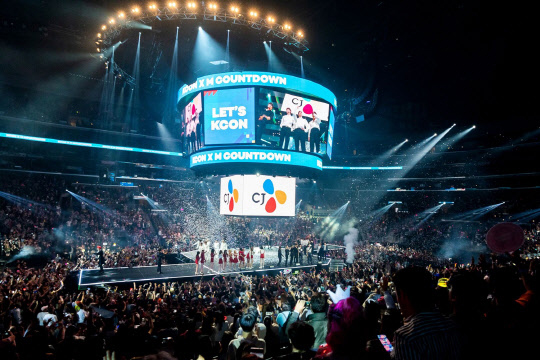 KCON, the world’s largest festival on Korean pop culture in its eighth year, has attracted an accumulated 1 million audience from all around the world this year, with the bulk coming from America, according to its sponsor.

CJ ENM, the entertainment unit of South Korean conglomerate CJ Group, said on Monday that the accumulated number of fans visiting KCON has topped 1 million over the weekend after hosting the Korean wave festival in Los Angeles in the U.S. The milestone comes after 8 years the company first started KCON in Irvine, California, in 2012.

CJ ENM started hosting KCON 8 years ago, expanding the festival from North America to Central and South America, Europe, the Middle East, Asia, and Oceania, with an aim to promote K-lifestyle.

So far, a total 1.069 million fans have shared experiences offered by KCON, of which 60 percent was from the U.S.

For the latest festival in LA, CJ ENM, in partnership with the Ministry of SMEs and Startups, Korea Federation of Corporations for Large & Small Business, Rural Affairs, and Korea Trade-Investment Promotion Agency, invited 40 promising small- and mid-size companies wishing to advance into overseas markets to participate in its sales promotion event and exhibition session for K-Collection at LA Convention Center.

The small- and mid-size companies were given the opportunity to hold one-on-one meetings with about 60 local buyers including American fashion shopping mall Revolve. This year, 28 beauty-related companies from Korea attended the event with hopes to expand sales of beauty items.

CJ ENM said that a total 257 small- and mid-size companies have participated in KCON in LA over the past 6 years.

This year’s festival, in particular, focused on introducing more of K-beauty and K-food content and programs directly led by social media influencers and K-pop artists taking into consideration that 67 percent of visitors are 24 years old and younger. 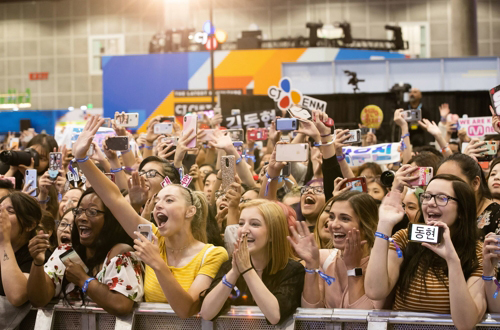 K-pop fans get together at KCON in LA, United States. [Photo provided by CJ ENM]

On the first day of KCON festival, CJ ENM held a Club KCON Concert and staged hip hop and dance performances, and on the next day KCON Rookies where new faces on the K-pop scene appeared on stage. On August 17 and 18, a total 14 K-pop groups performed at the festival’s most highlighted K-pop Concert at Staples Center.

KCON, which was held in Japan in May, New York in July, and LA in August, will be held at Impact Arena, Exhibition & Convention Center in Bangkok, Thailand, from September 28 to 29.