“The Battle: Roar to Victory” [Photo by Show Box]

A movie about the Korean independent militia’s biggest victory against Japanese forces during the Japanese rule topped the South Korean box office as its release came at a time when past issues hit a more poignant note after wartime claims spread over to the economic front.

“The Battle: Roar to Victory” opened Wednesday to much fanfare, drawing 334,189 viewers on the first day, which is rare for a history-based film, according to the Korean Film Council.

The movie is based on the Battle of Bongo-dong, a four-day clash in June 1920 that marked Korea’s first major victory against the Japanese colonial power. The film features Hong Beom-do, the leader of the Korean Independence Army, as well as many unknown heroes.

A wave of nationalistic fervor has swept across Korea since Tokyo in July tightened export controls on key materials that go into semiconductors and displays, Korea’s key export items. The move, which stemmed from a dispute over wartime reparation claims, touched on the deep-seated resentment among Koreans of Japan’s colonial past and quickly erupted into a nationwide anti-Japan movement, with Koreans shunning a broad range of Japanese goods from cars to beers and even travel to the country. 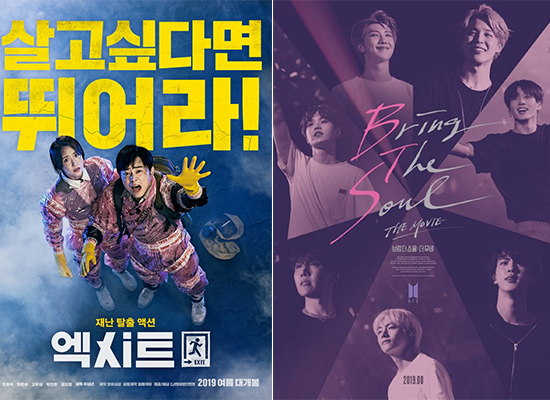 “Exit” and “Bring the Soul: The Movie”

The action comedy “Exit” slipped to second place after staying on top since its release on July 31. It garnered 306,594 new viewers to hit a cumulative total of 4,057,190.

“Bring the Soul: The Movie,” the third documentary movie from the K-pop superstar BTS, opened at No. 3, pulling in 109,276 viewers. The movie follows the septet in their Love Yourself world tour last year and features exclusive behind-the-stage moments, including a scene of their after-party on a rooftop in Paris.

By Kim Seul-gi and Kim Hyo-jin