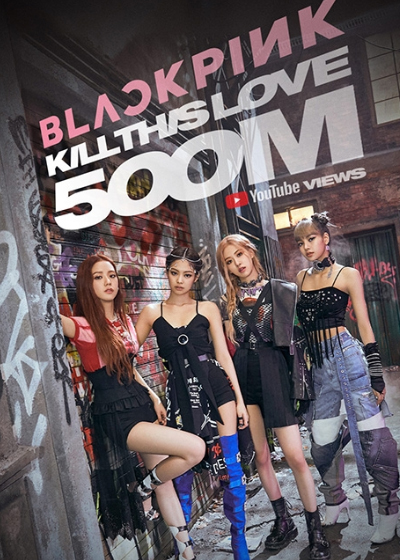 이미지 확대
K-pop star BlackPink has made another milestone achievement Thursday, with music video for “Kill This Love” topping 500 million views on YouTube in 111 days of release.

Around 1:38 a.m. on Thursday, music video for “Kill This Love,” the main track of the Korean girl group’s latest extended play record (EP) album, surpassed 500 million views at YouTube. The music video was released 111 days ago.

This also replaces the previous record made by the music video for “Ddu-Du-Ddu-Du,” which took 162 days to attract over 500 million views on YouTube.

The quartet’s latest single “Kill This Love” debuted at No. 41 on the Billboard Hot 100 chart. The namesake EP at the same time debuted at No. 24 on the all-genre Billboard 200 chart. Both are the highest-charting title by an all-female K-pop group.

The EP also charted on the Billboard Hot 100 chart and the Official Singles Chart Top 100 in the United Kingdom for four weeks and five weeks in a row, respectively, the longest-ever record held by female Korean act.

BlackPink is currently on tour around the globe, completing 32 concerts in 23 cities and readying for Japanese tour kicking off in December.