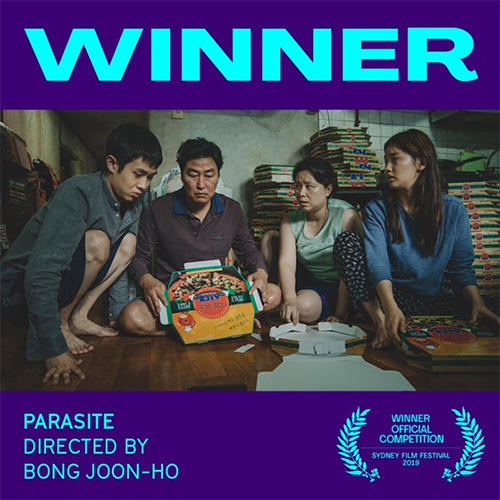 Parasite starring actor Song Kang-ho is “a thrilling, satirical take on income inequality” as told through two families. “With every frame beautifully composed, Parasite vividly contrasts the two families using humor, mystery and a creeping sense of tensions,” the Sydney Film Festival said on its website.

The Sydney Film Festival, held every year since 1954 in Australia, is to bring the world’s best new films to Sydney for 12 days and nights of inspiring and entertaining premiers, talks and parties. Twelve films are selected for the Official Competition, which celebrates “courageous and cutting-edge” cinema with a 60,000 Australian dollar ($41,298) prize.

It is not the first time that Bong joined the Sydney Film Festival. His previous work “Okja” also was screened as the closing film at the festival two years ago.

The movie has topped 8.3 million attendances on the 18th day of its release on Sunday, according to the Korean Film Council. It also ranked second at the French box office on the first week of its opening in France.

Parasite opens in Switzerland on Wednesday and then goes to Hong Kong, Macao and Vietnam this week. It will be screened in Singapore, Australia, New Zealand and Indonesia this month, Russia and Thailand in July, and the Philippines and Malaysia in August.

The North American opening is set for Oct. 11 for the film’s final goal for the Oscar awards.