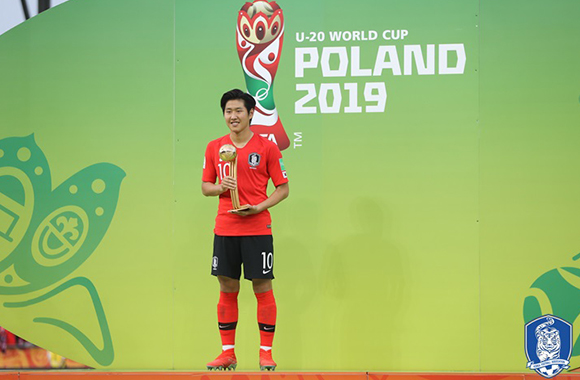 Hopes have been raised for the team Korea in future football championships after discovery of stunning young player Lee Kang-in who has become the first South Korean to bring home the best player trophy from a FIFA competition on top of high-flying Tottenham star player Song Heung-min.

Korean youths made history by finishing second at the FIFA U-20 World Cup following a 3-1 loss to Ukraine in the final in Poland on Saturday. South Korean midfielder Lee Kang-in made an early lead, but Ukraine scored three unanswered goals for their first title.

The 18-year-old playmaker (Valencia) helped lead South Korea to the runner-up finish, the country`s highest finish at any FIFA men`s tournament. Lee rose to fame by winning the Golden Ball as the best player, which is rare for a player in a runner-up team. Lee contributed to six out of nine goals that Korea scored with two goals and four assists in seven matches during Korea`s unexpected championship run.

It marks the first time for a Korean or Asian footballer to receive the top individual award at a FIFA international tournament. The highest award for the Korean team in the past was the Bronze Ball conferred to Hong Myung-bo in the 2002 Korea-Japan World Cup. Previous Golden Ball winners at the U-20 tournament include world star players, such as Diego Maradona of Argentina (1979), Lionel Messi of Argentina (2005), Sergio Agüero of Argentina (2007) and Paul Pogba of France (2013).

Lee’s impressive play raises expectations for the team Korea if he joins up with Korean forward Son Heung-min (Tottenham) to create synergy as early as 2022 when the Qatar World Cup comes around.

By Lee Yong-gun and Minu Kim