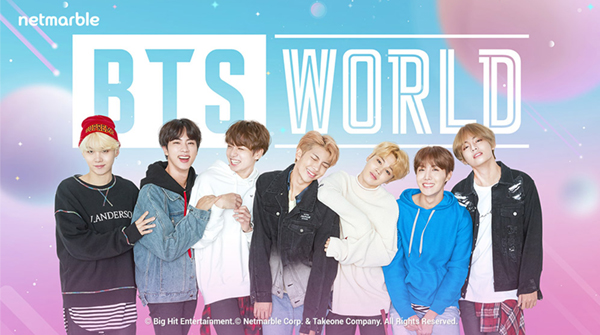 If chatting away with members and closely tracking BTS is not enough, ARMY fans can now act as their managers thanks to a new role-playing game out later this month.

Korean game publisher Netmarble said Wednesday it would release the new mobile game BTS WORLD on June 26 in major countries except China. BTS WORLD is an interactive game that puts fans in charge of BTS as their virtual manager, tasked with debuting the group and helping them rise to global fame.

The game includes exclusive photos and videos that give players the feeling of interacting with the seven members. Players can follow along the story by collecting and upgrading cards of each member and clearing various missions in the game.

As a sneak preview, Netmarble has put out a mini game on its pre-registration website. The site also features a matching game that pairs fans with the member they best match based on a series of questions.

Ahead of the official release, Netmarble and BTS’ label Big Hit Entertainment plan to release exclusive tracks for the BTS WORLD soundtrack, starting with a unit song by Jin, Jimin and Jungkook.

Launched in 2012 from a minor entertainment agency in Seoul, BTS rewrote Korean music history by becoming the first group since the Beatles to have three No.1 albums on the Billboard 200 charts in less than a year. They were also the first K-pop act to win two awards at this year’s Billboard Music Awards, taking home the trophy for top social artist for the third year in a row and receiving its first nod for top duo/group.

The group is currently on a world tour for its latest album “Love Yourself: Speak Yourself.” They recently performed two sold-out shows at the iconic Wembley Stadium in the U.K., becoming the first Korean band to headline the 60,000-seat venue.