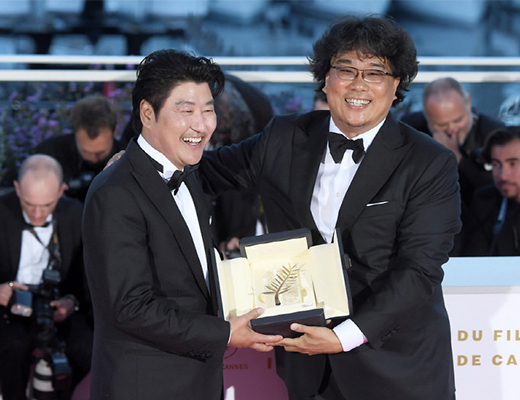 “Parasite" Bong Joon-ho and Song Kang Ho pose for a photo at the 72nd edition of the Cannes Film Festival in Cannes, France, on May 25, 2019. [Photo provided by CJ Entertainment]

“[Making] the film Parasite was an amazing adventure,” Bong said after receiving the coveted Palme d’Or at the 72nd Festival de Cannes in France. “I was able to make the film thanks to the artists – without outstanding actors and actress I wouldn’t have been able to film even one scene. I want to thank them.”

The decision to award Bong the Palme d’Or was a “unanimous” one for the nine-person jury, said jury president Alejandro Inarritu in the festival’s closing ceremony.

“Parasite” stars actor Song Kang-ho as head of a struggling and unemployed family who becomes entangled with a wealthy family with which they find jobs.

It is the first time in seven years that a Korean film won the most prestigious award at the world’s top three film festivals – in Cannes, Berlin, and Venice – after Pieta received the Golden Lion award for best film at the Venice Film Festival in 2012. It is also the first time in nine years that a Korean film won an award in the main competition at the Cannes Film Festival after director Lee Chang-dong’s “Poetry” received the Best Screenplay Award.

Bong’s “Parasite” was chosen by the nine juries over 20 other selections including Quentin Tarantino’s “Once Upon a Time… In Hollywood,” Luc Dardenne and Jean-Pierre Dardenne’s “Young Ahmed,” Pedro Almodovar’s “Pain and Glory,” and Celine Sciamma’s “Portrait of a Lady On Fire.”

이미지 확대
Bong, best known for previous films “Okja” and “Snowpiercer,” is a director known for making films based on his own standards and style. As rarely is the case, his films are recognized for having a popular appeal from the public and being artistic value. Bong is known as a director that portrays caring concern on an individual character while at the same time satirical aspects of the society, winning fetching both the public and critics.

Bong, who made his feature debut with “Barking Dogs Never Bite” in 2000, started to make his name in cinema through “Memories of Murder” released in 2003. The film, which is based on a true story of Korea’s serial murders that took place in Hwaseong, Gyeonggi Province, was reviewed as “well-made,” hitting 5.25 million viewers.

Also, “The Host,” a 2006 monster film, not only marked a new era in Bong’s filmography but it signaled the first Korean-style blockbuster film. The director’s Snowpiercer released in 2013 also made it to the Hollywood while he expanded cinema platform and released action-adventure film Okja on Netflix in 2017.

President Moon Jae-in hailed the news falling on the 100th anniversary of Korean filmmaking. “The movie was recognized as the best out of all movies produced this year,” he marked on his Facebook page, expressing respect to “Bong Joon-ho who has worked relentlessly toward his dreams since he was 12 to become a world-renowned director.”

The public also went euphoric over the news, queuing to see the first Korean movie that has brought home the highest Cannes honor. According to the Korean Film Council, Parasite is running No. 1 in ticket presales with the number totaling 87,599 and the reservation rate tallied at 41.5 percent as of Monday 8 a.m.