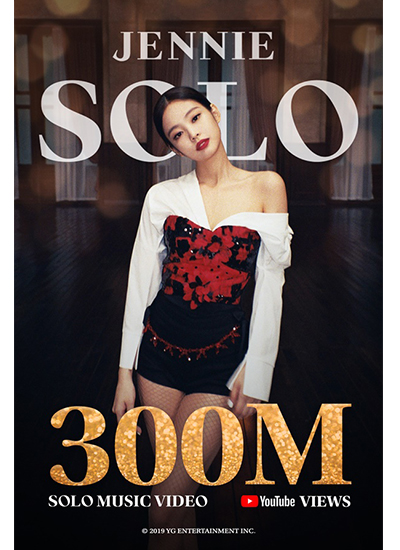 K-pop star Jennie, a member of girl group BlackPink, has made a new Korean music record with her debut single “SOLO.”

On Tuesday around 4 a.m., Jennie’s music video for SOLO hit 300 million views on YouTube, becoming the first Korean female singer to accomplish such milestone. Jennie released SOLO, her first pop single, on Nov. 12, 2018. She was the first from the four-member BlankPink to go solo.

Her group BlackPink became the first K-pop band to have a music video, “Ddu-Du Ddu-Du,” with more than 800 million YouTube views last Saturday. The group’s other music videos are also making impressive achievements – “As If It’s Your Last” and “Boombayah” each hitting 500 million views, and others including “Kill This Love” and “Playing With Fire” earning 300 million views.

The girl group’s dance practice videos also are attracting millions of fans across the world. A dance video shot for Ddu-Du Ddu-Du collected over 200 million views and others including Boombayah over 100 million views.