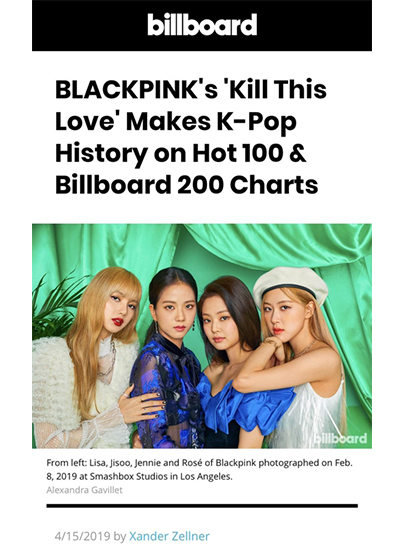 YG label star girl group BlackPink with its latest EP “Kill This Love” has hit new highs on the U.S. Billboard albums and singles charts this week, another landmark in female K-pop history.

According to Billboard’s latest charts on Tuesday (local time), BlackPink’s newest album “Kill This Love” debuted at No. 24 on the Billboard 200 chart, with the title track reaching a new peak at No. 41 on the Billboard Hot 100 chart.

It is bigger achievements than the female foursome’s previous act of its last album “Square Up” opening at No. 40 on the albums chart and the title track “Ddu-Du-Ddu-Du” hitting No. 55 in June 2018. 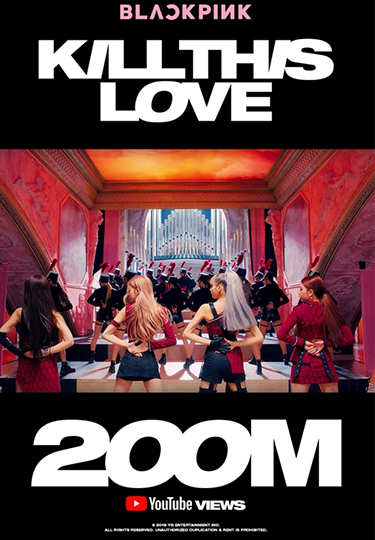 The Kill This Love album topped Billboard’s World Album Chart with an estimated 19,000 units of track equivalent albums plus streaming equivalent albums. The title track also entered the World Digital Song Sales chart at No. 1 and the Streaming Songs chart at No. 22 after garnering 18.6 million streams and 7,000 downloads.

The music video of the title song was watched by over 200 million across the globe in just less than 283 hours since its release on Apr. 5, the world’s fourth fastest act by a musician in history. It drew over 100 million views in just 62 hours, reaching the benchmark at the fastest pace among all YouTube videos.