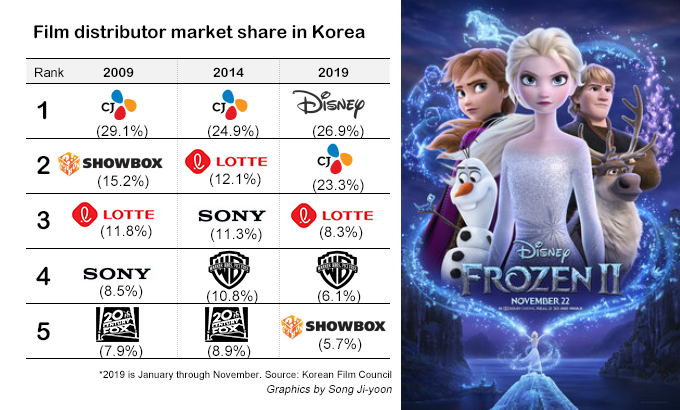 Walt Disney Company Korea was the leading film distributor in the country with a market share of 26.9 percent through November, ahead of No. 2 CJ ENM by 3.6 percentage points, according to Korean Film Council on Tuesday.

This is the first time for a foreign distribution house to claim the top spot in Korea since the council started releasing market share data in 2008.

CJ ENM, which lost out to Disney despite distributing major hits like Bong Joon-ho’s “Parasite” and action comedy film “Extreme Job,” will be joining hands with director Yoon Je-kyoon to make a film adaptation of the popular Korean musical “Hero.” Yoon was behind some of Korea’s highest-grossing movies, with the disaster film “Haeundae” garnering 11.3 million viewers and the drama film “Ode to My Father” pulling in 14.3 million.

The distributor would also back the upcoming film by Lee Yong-ju, known for his hit romance film “Architecture 101.” The new movie, tentatively titled “Seo Bok,” would be about the world’s first human clone and bring together heartthrob actors Park Bo-gum and Gong Yoo.

“The Man Standing Next” [Photo by Showbox]

Local distributor Showbox has seven films lined up for 2020, filled with A-list actors. In January, it would release “The Man Standing Next,” a movie that deals with the Oct. 26, 1979 assassination of Korea’s third president Park Chung-hee. Directed by Woo Min-ho, the film would feature an ensemble cast including Lee Byung-hun, Lee Sung-min and Kwak Do-won.

Lee Byung-hun is to star in another Showbox movie titled “Emergency Declaration" with Song Kang-ho, who has recently been gaining worldwide recognition for his role in “Parasite.”

In 2015, Showbox stood at No. 2 with a market share of 17.1 percent. But its market presence has continued to fall, with its share shriveled to 5.7 percent in January-November this year.