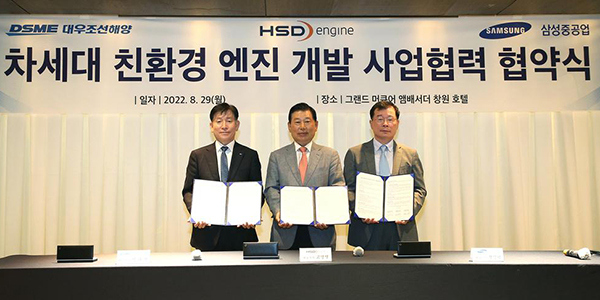 Under the MOU, the three will conduct joint research, develop eco-friendly engines and equipment, make collaborative efforts, and discover other promising next-generation areas.

Engine developers are now focusing on creating eco-friendly ship propulsion engines that can back methane, ammonia, and hydrogen as alternative marine fuels.

DSME is moving towards new growth despite challenges. It filed a 47 billion won ($34.85 million) damage claim against its labor union last Friday for the 51-day strike. State lender Korea Development Bank (KDB) which owns most of the company after multibillion-dollar bailouts, plans to proceed with privatization scheme by breaking up the company for sale.

DSME announced in mid-August that it has already achieved about 75 percent of its annual sales target of $8.9 billion with $6.67 billion orders thus far.