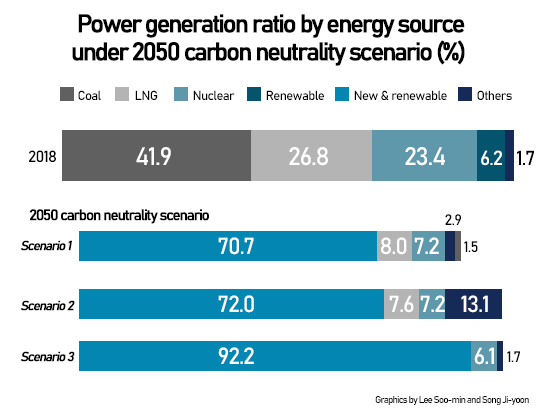 이미지 확대
Korea Hydro & Nuclear Power Co. (KHNP), the state operator of nuclear reactors that had complied with the government order to shut down Wolsong Unit 1 before its legitime lifetime, formally asked the government to revisit its nuclear phase-out plan to enable greater nuclear role for stable energy supply in carbon neutrality goal.

According to government and industry sources, KHNP formally contested to the long-term plan of achieving carbon neutrality by 2050 by plugging off aged coal and nuclear generators without adding new ones during a public hearing with the national carbon neutrality committee on Tuesday.

Under the scheme, only nine reactors would be left by 2050 to reduce the power sourcing from reactors to 6 to 7 percent from current 25 percent.

The operator argued too many uncertainties remained to achieve zero carbon goal primarily relying on renewables, demanding a revisit to the outline including flexibility in nuclear phase-out.

The nuclear phase-out plan has been one of the key agenda of the President Moon Jae-in’s administration. The presidential committee on carbon neutrality proposes to cut the number of nuclear power plants to 18 by 2030 and then to nine by 2050.

KHNP cited other governments that have been increasing nuclear reactors to achieve carbon emission goal.

The U.S. government is building more nuclear power plants and next-generation nuclear plants like small modular reactors as a promising source of clean energy as part of its carbon neutrality pledges. Japan also announced its energy plan in July to maintain the proportion of nuclear power at 22 percent in the energy mix in 2030.

The industry backed the argument.

Doosan Heavy Industries & Construction contended that the government must come up with a back-up plan as renewable energy sources alone will not be enough to handle peak demand periods. Hanwha Energy also noted that the near-sighted decision to close conventional power plants will pose a threat to national energy security.

Ban Ki-moon, former UN Secretary-General and chairman of the National Council on Climate and Air Quality, also opposed the government’s anti-nuclear policy, saying that it would be difficult to supply a sustained renewable energy given the geographical conditions and climate environment of Korea.

The Moon administration remained steadfast to its energy outline. The Framework Act on Carbon Neutrality and Green Growth passed the National Assembly in August and a bill to promulgate the law passed the cabinet Tuesday.