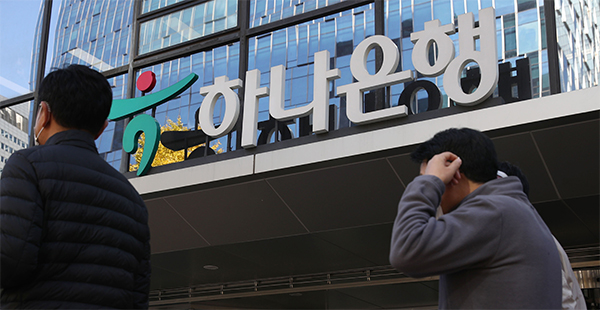 Hana Bank has kept the rate at above 4 percent. [Photo by Lee Seung-hwan]

Commercial lenders in South Korea are lowering deposit interest rates to below 4 percent despite higher base rate amid a decline in bank bond yield.

According to multiple sources from the bank industry on Tuesday, the interest rate for deposit accounts with a maturity period of one year at five major lenders in Korea has declined to the upper 3 percent range. Shinhan Bank and Woori Bank lowered the rate to 3.95 percent and 3.96 percent each on Tuesday, following the same move by KB Kookmin Bank and NH Nonghyup Bank that lowered the rate to 3.86 percent and 3.78 percent, respectively.

Hana Bank has kept the rate at above 4 percent.

The lenders were careful in their stance of raising deposit rates after the Bank of Korea increased the base rate by 25 basis points last week. They, however, decided to bring down the rates amid a fall in bank bond yield.

“Bank bond yield has declined and there are less factors for us to compete in raising deposit rates as we can secure funds by issuing bonds,” said an unnamed bank official.

Banks are considering reviewing to slightly raise interest rates on some deposit accounts, raising expectations for a further decline in loan rates.

“Interest rates on loans will go down further when deposit rates decline as it leads to a fall in Cost of Funds Index (COFIX),” the official said.

Internet-only banks are also cutting their loan rates. K-bank lowered the credit loan rate by up to 0.7 percentage point to 4.92 percent from 5.62 percent.