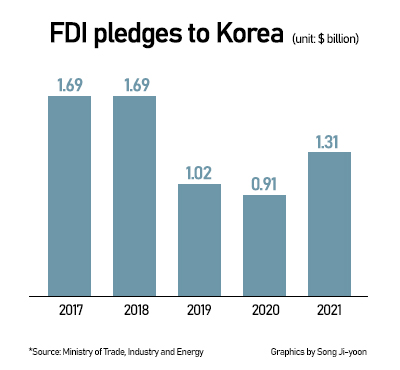 According to the Ministry of Trade, Industry, and Energy, registered FDI pledges in free economic zones totaled $1.3 billion won, up 42.8 percent. Executed FDIs surged 126 percent on year to $840 million won.

The cumulative FDI has reached $20.5 billion since free economic zones were introduced in 2003.

The feat is meaningful amid unfavorable conditions and reshaping in the global supply chain from U.S.-China faceoff, the ministry said.

Investment surged in resort and R&D sector as well as bio and new materials.

The surge in greenfield and service investments and increased commitments from European and Chinese capital stood out in last year’s FDI data.

By industry, manufacturing led by pharmaceuticals and metals, added 19.2 percent on year to $520 million. Investment in services sector expanded 64.7 percent to $780 million.