Barriers versus Korean exports on the rise annually, U.S. taking up one fourth 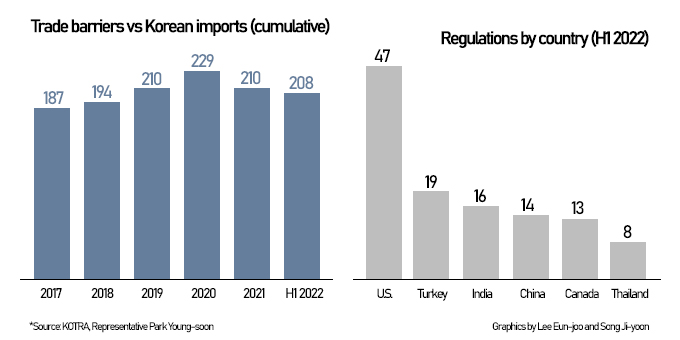 이미지 확대
Trade barriers versus South Korean exports by major markets have been escalating annually, with one fourth levied by the United States in the first half this year.

According to Korea Trade-Investment Promotion Agency data obtained by Rep. Park Young-soon of the Democratic Party on Thursday, South Korean exports faced 210 restrictive or punitive actions last year and 208 in the first half this year from 27 countries. The count has been rising from 187 in 2017 to 194 in 2018, 210 in 2019, and 229 in 2020.

By item, steel and metal products accounted for half of the sanctions (100 cases) in the first six months of the year, followed by chemical items (41), plastic and rubber (23), and textile and apparels (15).

Regulations on steel and metal imports reached 104 last year, up from 85 in 2017, while those on plastic and rubber items rose to 23 in the first six months of this year, up from 20 last year.

More than 7 out of 10 regulations were in the form of anti-dumping measures, while others were safeguard and countervailing duty levies.