South Korean consumer expectations for the inflation level in the coming year and broad pessimism for the economy have slightly eased for the second straight month in September to indicate the unprecedented tightening drive may have started to cool off apprehension about runaway inflation and impact on the economy.

According to Bank of Korea’s Consumer Survey for September released Tuesday, consumers’ expected inflation for the following year came to 4.2 percent, down 0.1 percentage point from 4.3 percent in August and edging away from the peak of 4.7 percent in July.

The survey was conducted on 2,500 households between September 13 and 20.

Nearly two out of 10 consumers expected consumer prices to rise 5~6 percent while 16.9 percent, down 2.3 percentage point from a month ago, expected above 6 percent.

The Korean base rate has been yanked up in five out of six rate-setting meetings so far this year, reaching 2.50 percent as of the last meeting in August and rising 175 basis points from a year-ago period. It is widely expected to top 3.0 percent by the year-end as inflation is expected to hover around 5 to 6 percent for a “considerable period”, according to Bank of Korea Governor Rhee Chang-yong.

Consumers’ perceived inflation over the past one year remained unchanged from August at 5.1 percent in September, data showed. 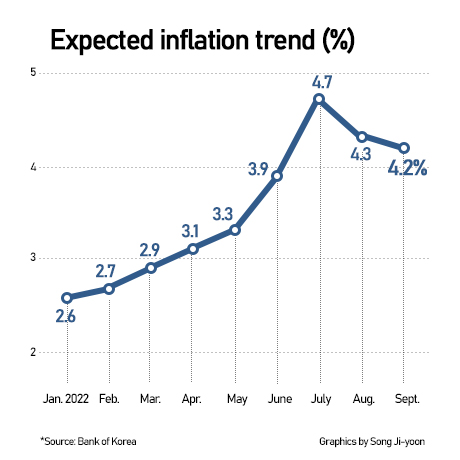 이미지 확대
Expectations for interest rates going higher eased by 2 points to 147 in September. A reading above 100 means that there are more anticipating interest rates to go higher than lower in six months time.

The index for prospective housing prices fell 9 points to an all-time low of 67 as “apartment sales price continued to fall and buying sentiment soured,” according to Hwang Hee-jin, a senior official at the BOK.

The composite consumer sentiment index (CCSI) was 91.4 in September, up 2.6 points from a month ago. A reading above 100 means people are more optimistic than pessimistic about the economy, and vice versa for a reading below 100.

Five of six major indicators that make up the CCSI rose in September from the previous month.