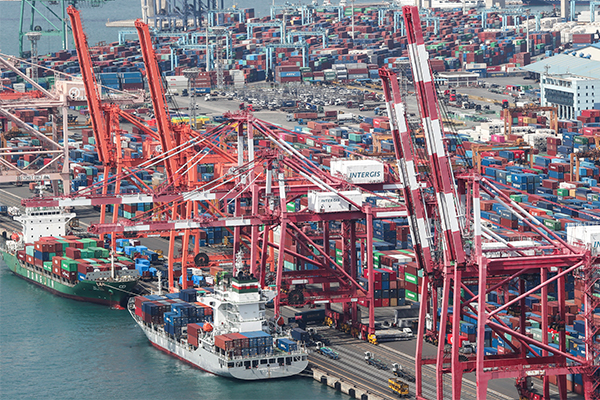 According to data released by Korea Customs Service on Wednesday, the country’s exports fell 8.7 percent on year to $32.96 billion in the first 20 days of September. Average daily export increased 1.8 percent on year based on 13 working days, 1.5 days shorter than a year earlier due to Chuseok holiday.

Exports growth would be coming to a stop for the first time since October 2020..

Exports to Singapore, on the other hand, increased 44.3 percent and Malaysia 28.4 percent.

The country’s imports added 6.1 percent on year to $37.06 billion in the first 20 days of September. Average daily import rose 18.3 percent.

Imports have been exceeding exports in growth for 15 straight months since June last year. 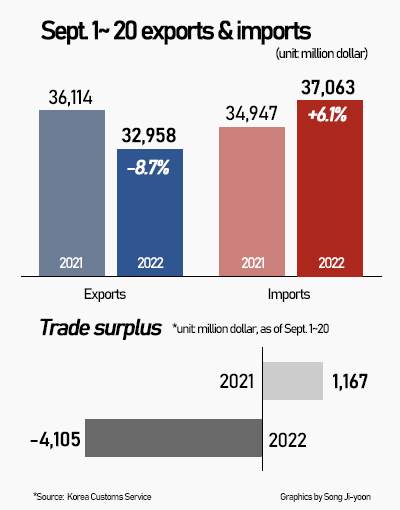 Korea’s trade balance incurred a deficit of $4.1 billion in the first 20 days of September in sharp retreat from a surplus of $1.17 billion in the same period a year ago.

Korea managed to report a trade surplus of $924 million with China in the first 20 days of September after four straight months of deficit until August for the first time since bilateral relations normalized in 1992.

Korea’s cumulative deficit in its trade balance this year as of Sept. 20 reached $29.2 billion, already exceeding annual record high of $20.6 billion in 1996.

“Export growth has slowed and deficit in trade balance continues due to a surge in energy imports,” said Economy and Finance Minister Choo Kyung-ho. “There needs to be close monitoring as there is big volatility in energy prices and export restriction risk surrounding chips and China.”

The Korean government plans to spend 12 billion won ($8.6 million) in reserves to support exports by easing distribution costs. It will also come up with measures to enhance competitiveness in shipbuilding, secondary battery, artificial intelligence and robot, and future mobility sectors to motorize exports of potential new industries and enhance competitiveness of core industry sectors, according to Choo.

A separate survey on economists by the Federation of Korean Industries showed Wednesday that Korea’s trade deficit could reach an all-time high of $28.17 billion this year. The survey, conducted Sept. 6-15 online, asked 15 research center heads of Korean brokerages. They predicted the U.S. dollar could go up to 1,422.7 won.

Four out of 10 in the survey expected deficit to reach above $30 billion.