Korea’s auto output, exports, domestic sales all up in August

South Korea’s automobile output, exports and domestic sales all grew in August against a year ago for the first time in 19 months, data showed.

According to the Ministry of Trade, Industry and Energy on Friday, Korea exported total 168,155 cars worth $4.12 billion in August, gaining 29.1 percent in number and 35.9 percent in sum from the previous year, thanks to strong demand for eco-friendly vehicles from overseas. It marked the biggest for the month by value.

Exports to North America jumped 66.8 percent on year to $2.03 billion worth, contributing much to the growth.

Automobile output from Korea in August was estimated at 284,361 units, adding 21 percent from a year earlier on an ease in chip supplies. In August last year, carmakers struggled under automotive chip shortages and factory shutdown due to resurging Covid-19 cases in Southeast Asia. 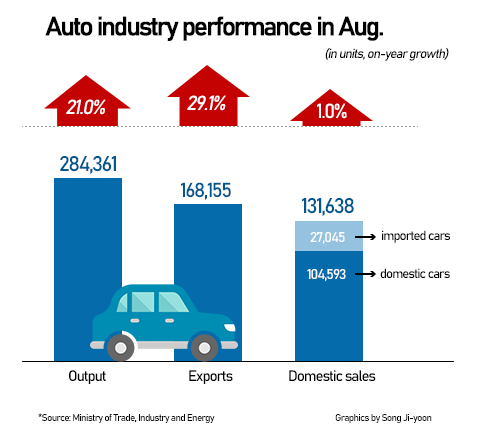 Eco-friendly car sales at home rose 9.7 percent to 35,227 units and exports up 47 percent to 40,215 units. Both marked the biggest for the month. Exports by value also soared 45.7 percent to total $1.22 billion, extending its growth streak for 20 consecutive months.

Of the total automobile exports, green cars accounted for 23.9 percent in number and 29.6 percent in value. The majority were shipped to the United States. Green car exports to the U.S. more than doubled to total $140 million worth in August. Hyundai Motor and Kia’s market share in the U.S. rose 0.7 percentage point to a combined 10.7 percent in the first eight months.