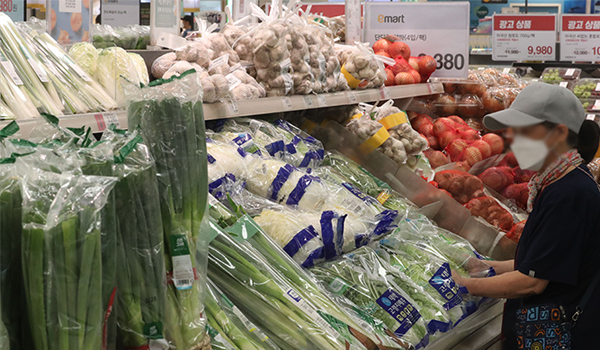 South Korea is expected to finish the year at an inflation topping 5 percent for the first time in 24 years and faces lengthier run of strong prices as the expected inflation also nears 5 percent.

According to data from Statistics Korea Monday, the consumer price index rose at an average 4.9 percent through January to July against year-ago period. It gained 0.6 to 0.7 percent monthly on average from January to June. The on-month gain slowed slightly to 0.5 percent in July.

The government set inflation target of 4.7 percent for this year, but unofficially admit higher figures as spike in fuel and commodity import prices have sent prices higher across the board from factory products to service charges.

The core consumer price index (CPI) that counts out volatile food and energy factors rose 4.5 percent on year in July, the fastest pace since 4.5 percent in March 2009.

“It will not be easy for prices to fall from the previous month as price surge has spread to individual services and industrial goods on top of petroleum and food,” said Ha Joon-kyung, professor at Hanyang University. 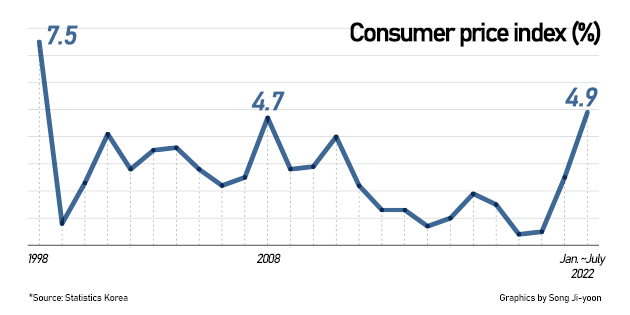 이미지 확대
The government and Bank of Korea expected inflation rate that touched 6.3 percent in July to reach peak in September and October before slowing down as international raw materials prices such as crude oil have declined.

Oil prices that surpassed $120 per barrel fell to $90. The resumption of Ukraine grain exports is raising hopes for stable grain prices.

But more external uncertainties have surfaced.

The conflict between China and Taiwan may lead to renewed supply chain setback and uncertainty in global financial market.

“The China-Taiwan conflict may intensify confrontation between the western countries and controlled states of China and Russia, which can lead to even stronger dollar,” said Cho Young-moo, a researcher at LG Economic Research Institute. “Import prices may come under bigger upward pressure.”

Expected inflation rose to 4.7 percent in July, up 0.8 percentage point from 3.9 percent in June, the highest since Statistics Korea began compiling related data in 2008 and the fastest on-month growth. A high rate may trigger prices to surge further on wage and service price hikes.

“The Bank of England recently raised its base rate and predicted long recession,” Cho said. “It is seen as a move to lower prices by bringing down sentiments of economic subjects.”

“The government should show active will to lower expected inflation by mobilizing multiple policies and present clear direction,” he added.