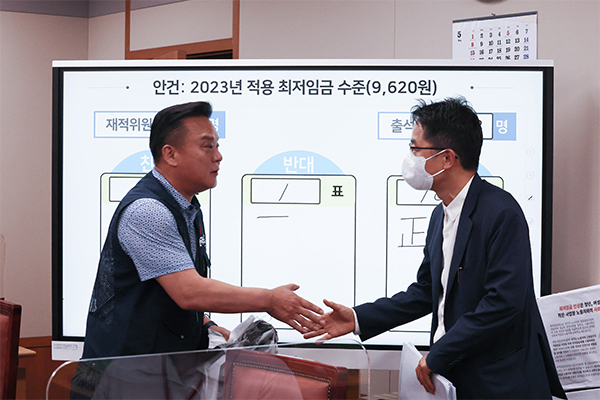 South Korea’s minimum hourly wage for next year has been finalized at 9,620 won ($7.4), up 5 percent from this year, as agreed by the representatives of employees and employers last month, the Ministry of Employment and Labor announced Friday.

The labor minister published the new minimum wage in the government’s electronic gazette Friday, which would take effect from Jan. 1. The hike translates to a monthly wage of 2.02 million won based on 209 working hours per month. The new rate will apply across all industries.

The Minimum Wage Commission comprised of 9 members each representing employees, employers and public sector set the rate on June 29. The labor ministry notified the minimum wage proposal for next year on July 8 and received appeal until July 18.

The employees and employers group raised four cases of appeal during the cited period, with the employees claiming that the rate hike is too low while employers too high. 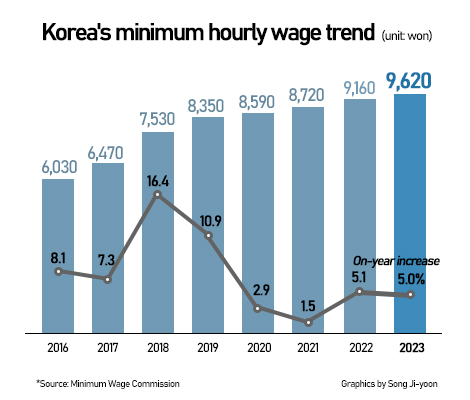 이미지 확대
The labor ministry, however, did not accept the appeal after comprehensively reviewing the Minimum Wage Commission’s deliberation procedure. There hasn’t been once where the country’s minimum hourly wage has been returned to the commission for re-review.

The wage hike for next year, meanwhile, is similar to this year’s 5.1 percent gain. It is still less than 10,000 won, a pledge vowed by former president Moon Jae-in. The minimum wage in the early years of his presidency rose in double digit rates but slowed later amid controversy that the fast rising rate is hurting small businesses and employers.

The 5 percent increase is lower than the monthly inflation that rose 6.3 percent on year in July.