The surplus in South Korea’s current account thinned more than $3 billion in June on imports running stronger than exports from spike in commodity prices, raising concerns for growth in the external-reliant economy and foreign exchange reserves.

The country’s current account surplus stood at $5.61 billion in June, losing $3.22 billion from $8.83 billion in the same month a year ago, according to data from the Bank of Korea Friday.

Korea had managed to maintain a surplus streak for 23 months in a row from May 2020 to March 2022 but its current around fell in red in April due to rise in imports and overseas dividend, stoking alarm about a twin deficit as the country has been in the red in the fiscal balance from record spending against pandemic fallout. The balance returned to the black in May.

In the first six months of the year, Korea’s current account surplus reached $23.78 billion, above $21 billion projected by the BOK in May, but $16.97 billion short from a year-ago period in the second biggest-ever half-year fall since 2017.

Still, it is uncertain whether the surplus will reach annual target of $50 billion amid widening red in the trade account as it has been incurring deficit against China who makes up for the bulk of Korea’s trade surplus for three straight months till July.

The goods account posted a surplus of $3.59 billion in June, off $3.96 billion from a year ago due to a rise in imports. 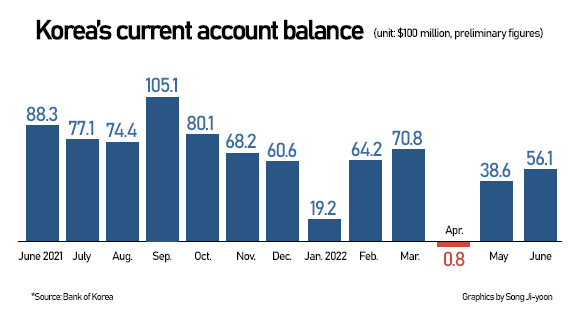 The services account logged a deficit of $490 million in June, extending a deficit streak for the second month although narrowing $530 million from a year ago.

In services account, transportation account registered a surplus of $1.65 billion in June, up $530 million from $1.12 billion a year ago on higher shipping cost. The China Containerized Freight Index (CCFI) surged 30 percent in June from the same period last year.

The travel account showed a deficit of $690 million in June, widening from $490 million a year ago, as Koreans renewed overseas travel on eased virus danger.