Korea’s inflation steepest in 24 yrs, rising above 6% for the second month in July 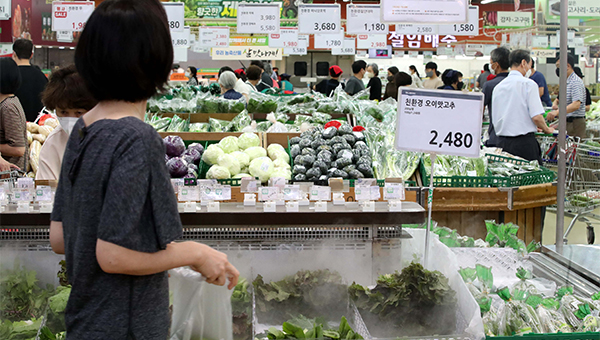 South Korea’s inflation rate galloped at over 6 percent for the second straight month in July in the fastest pace in nearly 24 years as expensive fuel and commodity prices spilled across the board from groceries to utility and services charges.

According to Statistics Korea on Tuesday, the country’s consumer price index (CPI) jumped 6.3 percent year over year to 108.74 in July.

The last time headline inflation ran above 6 percent for two moths was in the third quarter of 1998 when the country was under international bailout from liquidity crisis.

Prices have zoomed from sub-1 percent levels in 2000 and early 2001 amid pandemic, rising to 3 percent level in October last year, then 4 percent range in March and 5 percent in May.

The U.S. dollar rose above 1,300 won to 1,307.50 early Tuesday while stock markets turned lower on another data boding badly for the external-reliant economy. Korea’s trade deficit widened in July to stretch to the largest-ever $15 billion on worsening toll on the economy from expensive imports.

The core CPI that excludes volatile food and energy factors rose 4.5 percent in July, the highest since March 2009.

The headline inflation was raised by prices of industrial goods and individual services.

Prices of industrial goods including petroleum (35.1 percent) and processed foods (8.2 percent) jumped 8.9 percent on year in July. The surge in petroleum prices eased for the first time this year and from a 39.6 percent spike in June.

Electricity, water, and gas prices rose 15.7 percent on year in July, accelerating from a 9.6 percent increase in June, the steepest rise since the agency began compiling related data in January 2010.

Prices of individual service rose 6.0 percent, the highest level since 6.6 percent in April 1998. The cost of dining out jumped 8.4 percent. 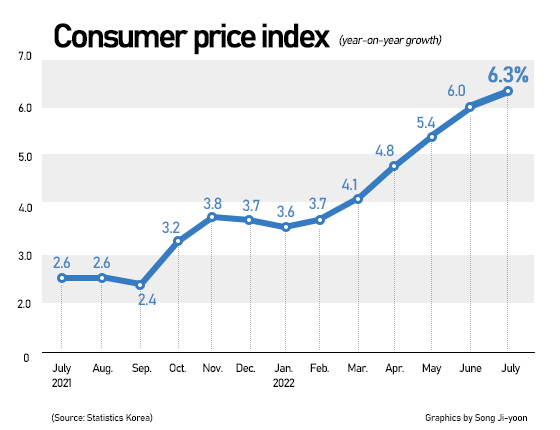 이미지 확대
Living necessaries price index shot up 7.9 percent from a year ago, the highest since 10.4 percent in November 1998.

The Ministry of Economy and Finance in a separate release said that consumer prices accelerated in July from June as prices of agricultural, livestock, and fisheries products soared sharply from hot weather on top of gains in industrial goods and individual services. Agricultural, livestock, and fisheries products contributed 0.62 percentage point to overall price gains in July, up from 0.42 percentage points, due to weather condition and higher costs.

The ministry noted that international oil prices that fanned inflation have slightly declined on tariff exemptions, pushing down average gasoline prices at major gas pumps to 1,800 won ($1.38) per liter on July 31.

The Bank of Korea in a statement on the July CPI predicted inflation will run in 6 percent range “for some time”, and its governor Rhee Chang-yong in a parliamentary hearing on Monday projected the inflation to peak out in the fourth quarter, reiterating rate increases should continue during the period, albeit in moderate pace of 25 basis points. The base rate has been pushed up to 2.25 percent through unprecedented 50-basis-point increase in July.