(Updated with additional information and comments)

South Korea added $4.67 billion in deficit from trade activities last month to put the cumulative red in the trade balance at $15.03 billion in July as imports continued to outweigh exports from strong commodity prices and demand from its largest market of China waned.

According to data released by the Ministry of Trade, Industry and Energy on Monday, the trade account in July generated a deficit of $4.67 billion as imports grew 21.8 percent to $65.37 billion versus 9.4 percent gain in exports to $60.7 billion.

The deficit streak extended to the fourth month, the longest red since June-September in 2008.

Korea’s trade deficit hit $10.3 billion as of June, the largest red for a six-month period.

Worse, the country has logged a deficit in trade with China which had been responsible for the bulk of the country’s annual trade surplus for the third straight month to raise concerns for entrenched worsening in the Korean trade balance on increased China’s technology self-sufficiency.

Korea has been registering a deficit in trade with China from May this year for the first time bilateral data was kept since normalization of ties 30 years ago. 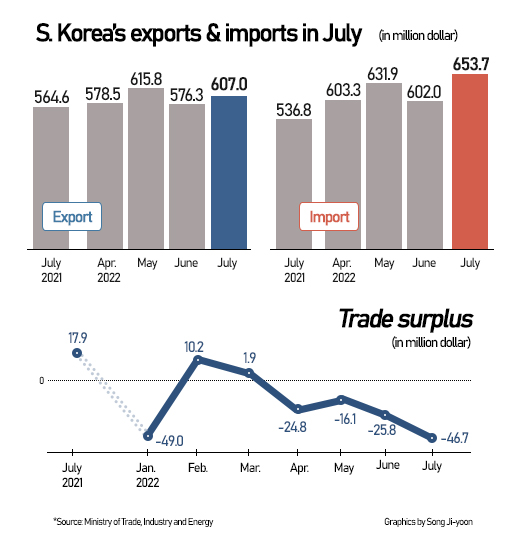 이미지 확대
Korea incurred a trade deficit of $570 million with China for the third straight month. Chip shipments to China increased while steel and petrochemicals fell 8.3 percent and 14.1 percent, respectively.

“Exports in June gained by a single digit in July following June due to sluggish global economy,” said Trade, Industry and Energy Minister Lee Chang-yang. “There are concerns about a slowdown in export growth and widening trade deficit. The government is well aware of the situation and is doing its best to maintain industry and corporate competitiveness.”

Lee noted that the government will announce a comprehensive export measure that will include special support to major industries and regulatory easing that have restricted export activity this month.

Coal prices skyrocketed to $410.24 per ton in July, which resulted to record imports to Korea. Coal imports were up 110.9 percent to $2.99 billion.