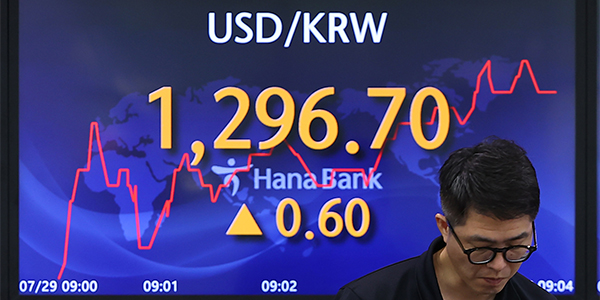 South Korean authorities will encourage local financial institutions to bring short-term dollar-denominated liquidity to home to help stabilize the Korean won as they see restrengthening in the U.S. dollar from fast rate increases.

The U.S. dollar on Thursday softened below the 1,300 won for the first time in 15 trading sessions on renewed foreign stock investment upon removed uncertainties related to U.S. Fed Reserve actions after a back-to-back 75-basis point raise.

But authorities and market watchers forecast the exchange rate to range from 1,300 to 1,350 won when the gap between the U.S. and Korean rates widens due to faster hikes in the U.S.

“When you look at the pattern this year, U.S. stocks rose and the Korean won rose against the U.S. dollar on the day the U.S. Fed announced its fund rate range” said Baek Seok-hyun, an analyst at Shinhan Bank. “But then stocks soon lost ground, affecting the exchange rate.”

The analyst said that preference for safe assets like the U.S. dollar will continue due to sluggish global economy led by high inflation in the U.S. and uncertainties in Russia and China. He expected the U.S. dollar to trade at 1,300~1,350 won range later this year.

To funnel more dollar liquidity into the Korean capital market, authorities plan to leverage on treasury holdings by local institutions.

Institutions like insurers will be encouraged to issue repurchase agreements to raise short-term dollar funds backed by treasury holdings.

Korean financial institutions held $34.46 billion worth debt issued by the U.S. government and international organizations, about 129.5 percent above their debt issues in foreign currency denomination as of last year.