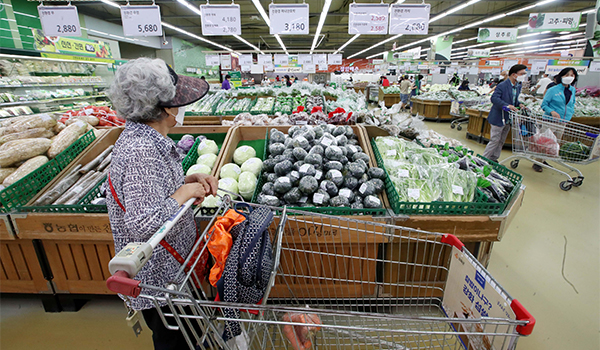 Consumer expectation for the inflation rate in the following year hit record-high of 4.7 percent in July to add more pressure to the inflation already running at 6 percent and unprecedentedly fast monetary tightening as well as dampening consumer sentiment to its weakest in South Korea

According to the Bank of Korea’s Consumer Survey for July released Wednesday, consumers’ expected inflation for the following year came to 4.7 percent, up 0.8 percentage point from 3.9 percent in June. The reading is the highest and the fastest on-month rise since the central bank began compiling related data in 2008.

More than two out of 10 consumers expected consumer prices to rise above 6 percent in the following year while 19.6 percent expected 5~6 percent, and 17.2 percent 4~5 percent. Consumers pointed to high prices of petroleum products, utility, and agricultural, livestock, and fisheries products for inflationary buildup.

Consumers’ perceived inflation over the past one year was 5.1 percent, up 1.1 percentage point from a month ago.

Anticipation of interest rates going higher hit record-high of 152 in July. The figure has been climbing from March in line with faster rate increases. 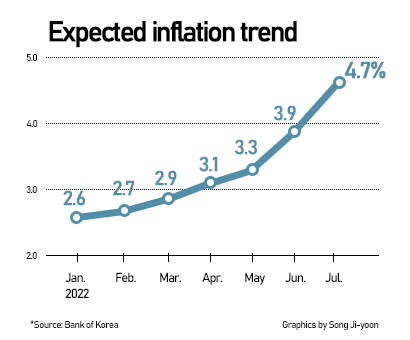 이미지 확대
A reading above 100 means that there are more anticipating interest rates to go up than down in six months time.

After confirming the CPI running at 6 percent, the Bank of Korea took an unprecedented move of raising the base rate by 50 basis points to 2.25 percent on July 13.

The composite consumer sentiment index (CCSI) was 86.0, down 10.4 points from a month ago to dip below 90 for the first time in nearly two years. The index has been on decline since May.

All six major indicators that make up the CCSI fell in July from the previous month amid rising prices, global monetary tightening, and concerns about slow economy.

The index for prospective employment opportunities was also down 17 points to 69 and prospective housing prices 16 points to an all-time low of 82.