Korea’s exports to China fall and those to U.S. rise amid shift in trade order 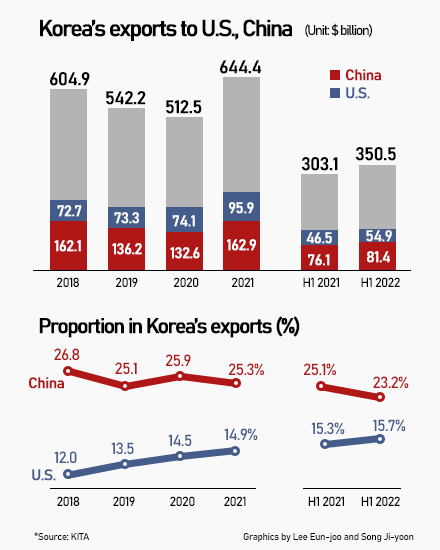 이미지 확대
South Korea shifting towards the U.S.-led alliance on global supply chain has been incurring trade deficit against China this year for the first time since normalization of ties as China-bound shipments fell at the expense of gains in U.S. exports.

According to data from Korea International Trade Association (KITA) Monday, Korea’s exports to China stood at $81.4 billion in the January-June period, up 6.9 percent from a year ago. China made up 23.2 percent of Korea’s total exports of $350.5 billion in the first half, compared with 25.1 percent in the same period last year. The shipment on-year gain was below the average of 15.6 percent rise in Korean exports in the first half.

Exports to the U.S. rose by bigger 18.2 percent to $54.9 billion. The U.S. accounted for 15.7 percent of Seoul’s entire exports, gaining 0.4 percentage point from a year earlier.

The fall in shipments to China has been affected by lockdown of major cities like Shanghai and Beijing to mitigate virus spread.

Korea has been losing grounds in intermediary exports to China under Beijing’s localization campaign.

The share of U.S. has instead been on the rise on increased trade activities based on economic alliance.

Korean has been under greater pressure to join the U.S.-led global chain alliance this year. It joined the Indo-Pacific Economic Framework for Prosperity (IPEF) launched in May designed to contain Chinese influence in the region.

It also has been invited onto the “Chip 4” that calls for chip alliance among the U.S., Korea, Japan, and Taiwan. The U.S. has asked Korea to make a decision on the participation by the end of August.

Korea meanwhile has been doing what it can as not to ruin ties with China, which remains its biggest trade partner, ahead of the 30th anniversary of China-Korea diplomatic normalization on August 24.

Korea’s Foreign Minister Park Jin is in talks to arrange a visit to China next month and the Ministry of Trade, Industry and Energy is reviewing export support measures by “promoting economic partnership projects, enhancing practical cooperation, and boosting export marketing focusing on China,” according to trade minister Lee Chang-yang.