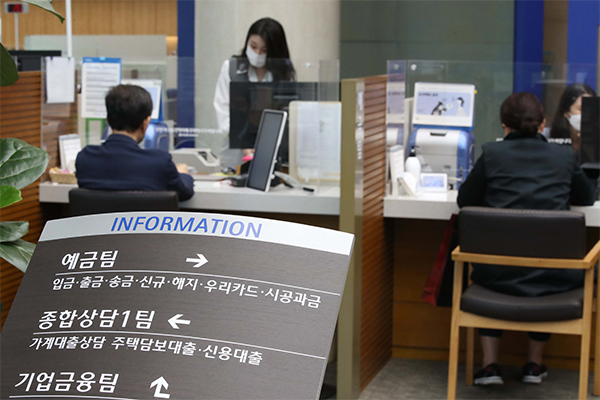 The growth in South Korean private debt, which has come to more than double the gross domestic product, has marginally eased in the first quarter amid rising interest rates.

The country’s private sector credit to nominal gross domestic product (GDP) ratio came to 219.4 percent at the end of March, according to the Bank of Korea on Wednesday.

The figure is down 0.1 percentage point from the historic high of 219.5 percent at the end of December 2021 on reduced household debt whose ratio eased to 104.5 percent.

Household debts grew 5.4 percent on year to 1,859.4 trillion won ($1.4 trillion) as of end-March, but growth pace has slowed, according to the central bank.

Corporate borrowing, however, increased amid sluggish stock and bond market.

The Financial Stress Index, which represents the stress level in the financial market based on readings from economic and capital market activities, came to 13 in May to remain in the “caution” category for the third month in a row.

The Financial Vulnerability Index, measuring imbalance in the financial market and authorities’ resilience capacity, has weakened to 52.6 from 54.8 in just over three months. But, it nevertheless is above the long-term average of 37.4 compiled since 2007 on heavy household debt.

The central bank was weary of risks to the financial market from strong inflation around the world, faster monetary tightening, and ripples from Ukraine-Russia war and China’s economic slowdown.

The bank in the report suggested incremental adjustment in loan policy and fiscal support measures to slow down debts’ growth pace, as well as holding up the country’s financial resilience by re-assessing credit risk evaluation standards and loan loss reserve level.