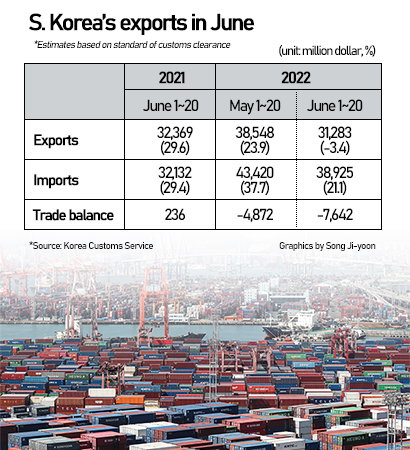 이미지 확대
South Korea is set to finish the first half in the biggest six-month red in trade balance as imports have become overwhelmingly more expensive from spike in international commodities for fueling and food than its exports of chips and other finished industrial products.

According to data released by Korea Customs Service on Tuesday, Korea’s exports fell 3.4 percent from year-ago period to $31.2 billion from June 1 to 20, while imports jumped 21.1 percent to $38.925 billion.

The trade balance as the result of towering imports incurred a deficit of $7.64 billion, compared with a surplus of $236 million a year ago.

Although daily exports were 11 percent higher, the double-digit growth streak since March last year is expected to come to an end this month.

Exports to Taiwan surged 16.5 percent and Singapore 54.9 percent, but shipments to the country’s key markets all fell – to China by 6.8 percent, the United States by 2.1 percent, the European Union by 5.3 percent, and Vietnam by 4.7 percent.

Accumulated deficit so far this year has reached $15.47 billion. The record six-month deficit had been $12.5 billion in the second half of 1996.