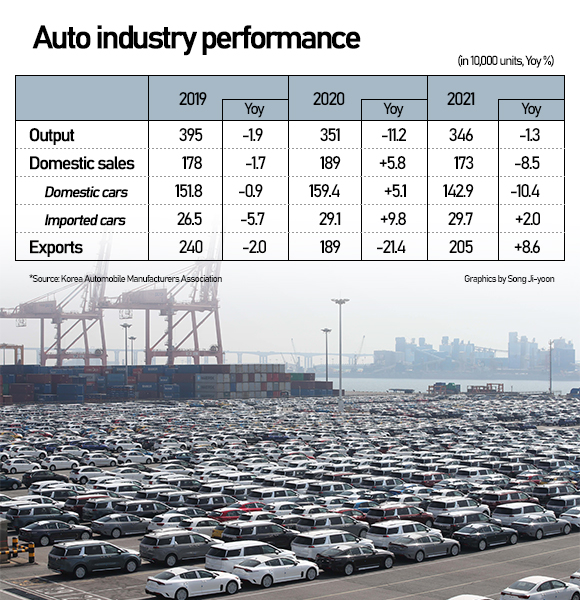 According to the Ministry of Trade, Industry and Energy on Tuesday, automobile output from Korea in 2021 was estimated at 3.46 million units, down 1.3 percent from a year earlier.

The country’s output last year was the fifth largest in the world as of November, unchanged for two consecutive years. China produced the largest, followed by the U.S., Japan and India.

Korea exported total 2.05 million cars worth $46.47 billion last year, up 8.6 percent in count and 24.2 percent in value from the previous year, thanks to increased brand awareness of Korean brands. It is the first on-year growth of both number and sum since 2012.

Hybrid car exports soared 71 percent on growing demand for eco-friendly vehicles, contributing much to the export growth. In the hydrogen car market, domestic brands have kept their lead for three consecutive years.

Overseas shipments of green vehicles took up 20.7 percent of total automobile exports, meaning that one out of five cars exported last year are eco-friendly cars, the ministry noted.

On the back of strong demand for cars outside the country, exports of auto parts also increased 22.2 percent to $22.78 billion worth in 2021.