Seoul to cut corporate, property taxes on slowed growth and near 5% CPI estimate 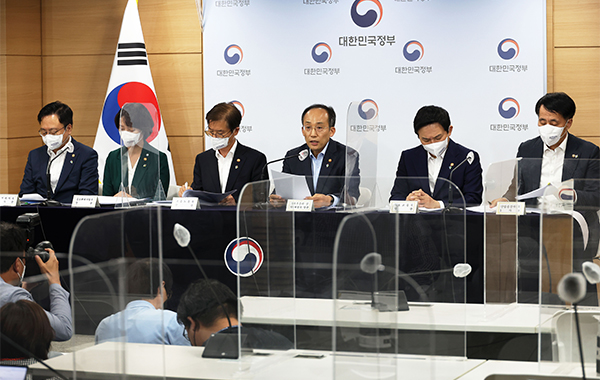 The South Korean government under Yoon Suk-yeol presidency in its first economic policy outline will lower the maximum corporate tax rate from 25 percent to 22 percent and up exemption for property ownership tax from the second half as it sees the economy running at around mid 2-percent range and inflation near 5 percent this year.

The government in its economic policy outline for the second half to be reported to President Yoon Suk-yeol who is about a month in office Thursday proposed to return the maximum corporate tax rate levied on big companies to 22 percent from the levels raised under the last liberal government to spur private-led growth to fight slowing economy.

The government cut target for this year’s gross domestic product growth to 2.6 percent from 3.1 percent estimated in December while sharply upping annual inflation outlook to 4.7 percent. 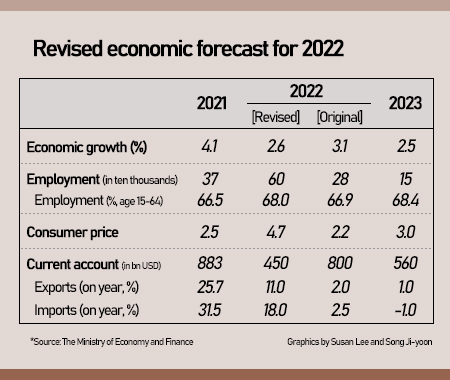 이미지 확대
Policies will be focused to lower production cost for companies through regulatory reforms and bigger tax exemptions. Punitive tax on big companies who neglect support or cooperation with smaller companies will be scrapped. Tax deductions and incentives in investments in key strategic industries like chips and bio will be expanded.

To help ease various other costs amid across-the-board jump in consumer prices, the government will raise the threshold for comprehensive real estate property tax levy to 1.4 billion won ($1.1 million) in appraisal value from current 1.1 billion won for a single home owner. 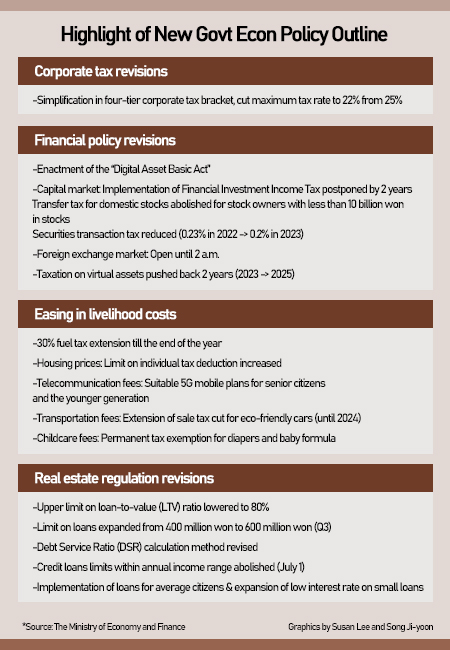 이미지 확대
Bank loans will become also much easier for first-time buyers. The loan-to-value ratio for mortgage loans to first-time home owner will be allowed up to 80 percent of the home value regardless the location, housing price, and income condition of the buyer.

The 30 percent fuel tax cut will be extended for another six months to the end of the year.

The levy on capital gains from crypto investment would be put off for two years. The tax on stock trade will be lowered to 0.20 percent from next year from 0.23 percent.

Childcare break can be prolonged to 18 months from current 12 months and basic pension would go up to 400,000 won from 300,000 won to address to low birth and aging society.