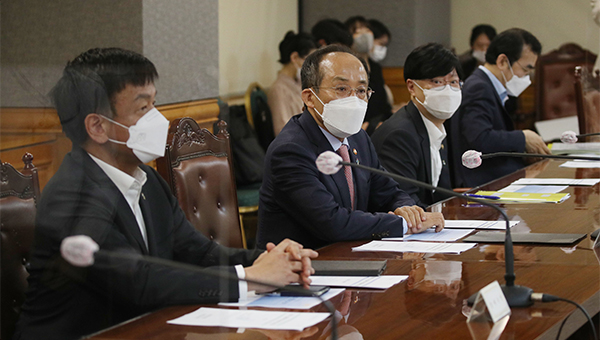 South Korea fiscal, monetary, and authorities on Thursday scurried to discuss concerted actions to stabilize the financial markets shaken by tantrums over steeper monetary tightening in the U.S. that could fasten rate increases at home.

The first emergency macroecnomic and financial meeting under Yoon Suk-yeol presidency was held before the markets opened after the overnight U.S. Fed’s rate hike of 75 basis points in the steepest increase since 1994 and hint of a similar action in July.

The Kopsi turned positive for the first time after a seven-day slide to the lowest in 19 months on Wednesday. It ended the day 0.21 percent higher at 2,452.49. The Korean won, which also tumbled to the weakest since 2009 against the U.S. dollar in the previous day, rebounded to 1,285.6. Bond prices were lifted from their lowest levels in 10 to 11 years, with three-year Korean government bond yield falling 1 basis point to 3.656 percent and 10-year declining 6 basis points to 3.735 percent. Bond yield and price move in opposite direction.

Choo said that the financial market was eased after the hike as it was somewhat expected, but “there are still concerns about increased volatility in the global financial market.” 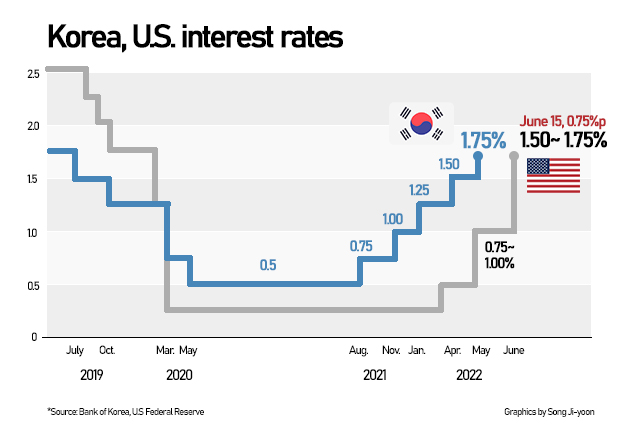 이미지 확대
The government and central bank will work with “intense” vigilance and strive to stabilize consumer prices, and financial markets and minimize risks to the financial sector. Among them, taming inflation would be most urgent, Choo said.

Whether that meant the Korean central bank could also take a bolder step from its earlier increases in 25 basis points, Rhee of BOK said necessary monetary action would be taken after watching the market conditions leading up to the next rate-setting meeting on July 13.

The market has already been factoring in a hike in 50 basis points in July meeting, with the three-year bond yield at 3.656 percent by midday Thursday, a tad lower than 3.666 percent closing on Wednesday which was the highest since May 2012.

After yanking up the benchmark rates from 0.75 percent~1.00 percent to 1.5 percent~1.75 percent, Fed Chair Jerome Powell hinted aggressive increases could continue as the bank is “strongly committed to bring inflation down and moving expeditiously to do so.”

“Clearly, today’s 75 basis points of increase is an unusually large one, and I do not expect moves of this size to be common. From the perspective of today, either a 50 basis point of a 75 basis point increase seems most likely at our next meeting,” he said.

Market insiders projected U.S. rates to go high as 3.4 percent by the end of the year. 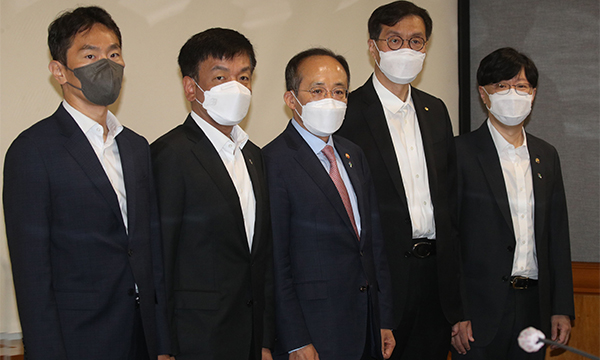 Due to the series of recent sharp raise, U.S. rates have come to match the Korean rates, although the BOK has started tightening campaign much earlier – in August last year.

The BOK raised its base rate by 25 basis points in a back-to-back move in May to 1.75 percent. A hike in two quarters of a percentage point has become more likely in July to lessen the gap with U.S. rates which would run higher after another big step next month.