S. Korea ends 2021 as No. 8 trade power with record exports and trade 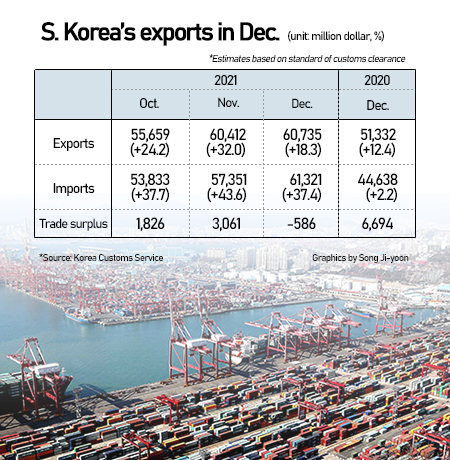 이미지 확대
South Korea ranked world’s No. 8 in trade power by achieving record $1.26 trillion in trade turnover and exports of $64.45 billion in 2021, benefiting from accelerated digitalization and migration to green vehicles on top of bio and Korean software demand under pandemic environment.

According to an annual trade report issued by the Ministry of Trade, Industry and Energy on Saturday, Korea’s annual trade value hit historic high of $1.26 trillion, pushing the country’s global rank one notch up to No. 8.

The country’s stellar trade report was mainly driven by its record high exports for 2021.

Exports of all 15 key items – chips, petrochemicals, and automobiles – grew at double-digit paces last year for the first time since 2000. Especially, outbound shipments of chips and petrochemicals hit new highs, while exports to nine regions including China, U.S., Japan, and India increased.

Korea’s outbound shipments hit a fresh monthly high of $60.74 billion in December, up 18.3 percent from the same period a year ago. Monthly exports topped $60 billion for the second month in a row after $60.41 billion in November and extended gains for the 14th month.

The gains in December spread across the board. Exports of 13 out of 15 items, including chips, petrochemicals, and secondary batteries rose, data showed.

Imports, meanwhile, surged faster at 37.4 percent in December from a year ago to $61.32 billion, causing a trade deficit of $590 million. It was the first time for monthly imports to top $60 billion amid a surge in intermediary and capital goods on domestic economic recovery and a boost in exports. Energy imports also rose on rising prices of oil and gas.

Korea is the only country among OECD members that has turned itself into an aid provider from an aid receiving country.

By Song Min-geun and Lee Eun-joo