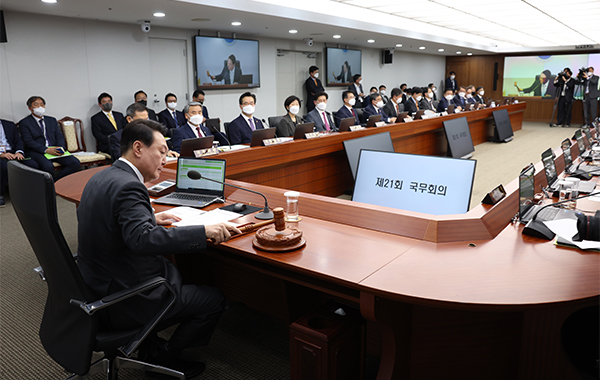 The first cabinet meeting under President Yoon Suk-yeol freshly in office on Thursday in Yongsan, Seoul, approved the largest-ever supplementary package of 59.4 trillion won in this year’s second addition to the supersized spending plan for this year.

As much as 25 trillion won would be doled out to fully compensate self-employed and merchants for the losses from business restrictions to contain virus spread over the last two years and subsidize their livelihood and payroll retention.

The government proposed to hand out from 6 million 10 million won to each 3.7 million merchants and small businesses according to their business losses and scale.

The government plans to fully cover losses for individual businesses in travel, air transportation, performance and exhibition, sports facility operation, and wedding hall management whose revenue has plunged by more than 40 percent.

“It is essential to helps self-employed and merchants back on their feet for the long-term economic prospects,” Yoon said as the record spending plans goes against the People Power Party (PPP)’s criticism against fiscal profligacy under the former government and can aggravate runaway inflation. 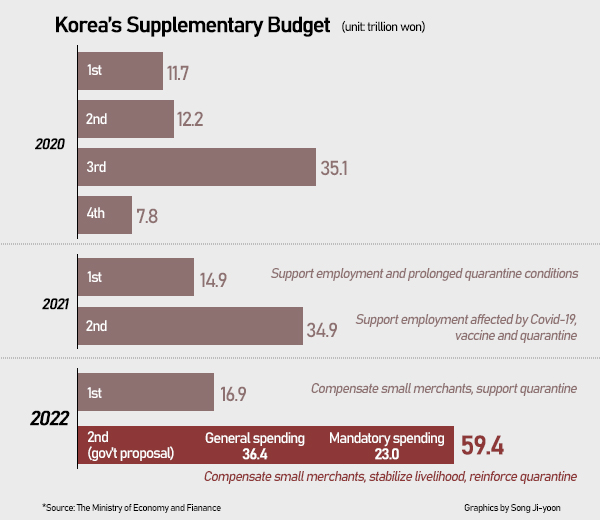 이미지 확대
The government on Friday has put the supplementary budget outline to the National Assembly dominated by the Democratic Party (DP), who could agree to stimuli given the importance of the upcoming June 1 local elections after losing the presidential election.

But the size could change during legislative review due to the potential impact on inflation that has been fastening monetary tightening.

Cash handout doubled from 2020 levels that amounts to 1.2 percent of last year’s gross domestic product of 2,057 trillion won could go to waste without helping productivity.

“The extra budget is expected to give upward pressure on prices by 0.1 percentage point to 0.3 percentage point,” observed Joo Won, director of economic research at Hyundai Research Institute.

According to the Bank of Korea, consumers’ expected inflation for the following year reached 3.1 percent, the highest in 9 years and the inflation rate in April at 4.8 percent. Due to the contradicting fiscal policy to its monetary tightening campaign, the BOK may have to hasten or broaden rate increases to contain prices.

The government vowed not to increase debt issues, but advancing spending from reserves for next year for debt refinancing would eventually add to the outstanding debt balance.