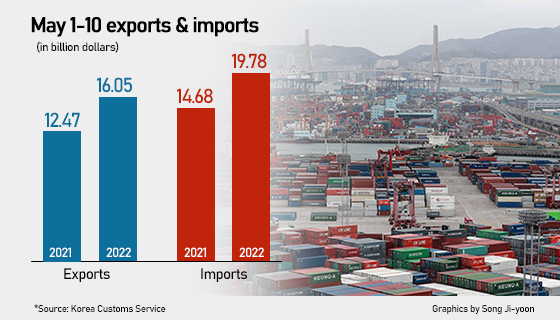 이미지 확대
South Korea’s exports in the first 10 days of May surged nearly 30 percent from the same period last year, but trade deficit widened as imports led by jump in commodity prices gained by a faster clip to flag an extended deficit streak in monthly trade balance.

According to data released by the Korea Customs Service on Wednesday, the country’s exports totaled $16.05 billion in the May 1-10 period, gaining 28.7 percent from a year-ago period.

Daily exports averaged $2.47 billion, up 8.9 percent from a year earlier based on 1-day longer working days from a year ago.

The gain in exports in the first 10 days of May was mainly driven by the robust demand for mainstay export items such as chips, petroleum products and automotive components.

South Korea has incurred deficit in its trade account since December, except for February, with the red widened to near $3 billion in April.