South Korea’s surplus on the current-account balance shrank in March as its trade surplus thinned by more than $2.5 billion from import costs overwhelming still-strong exports due to spike in fuel and other commodity prices.

According to data released by the Bank of Korea on Tuesday, the country’s current account logged $6.73 billion in surplus in March, maintaining its surplus streak for the 23rd month after May 2020, but smaller by $770 million from the same period a year ago.

Service account recorded a surplus of $360 million in March, reversing from $1.1 billion deficit a year ago.

Transportation account posted a surplus of $1.55 billion, up $970 million from a year ago in March. The Shanghai Containerized Freight Index (SCFI), widely cited metric on market freight quotations, rose 74.5 percent in March from a year earlier. Higher rates led transportation income to jump from $2.88 billion to $4.75 billion during the same period.

Tourism account deficit, meanwhile, widened from $360 million a year ago to $470 million in March. 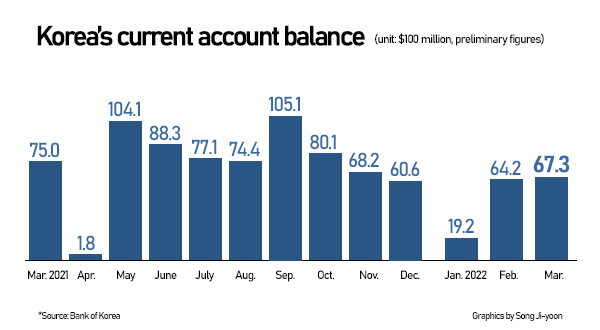 The BOK noted that there has been an outflow in the stock market due to Ukraine crisis. In bonds, foreigners are net purchasers given high credibility of Korean market and modest economic growth.

For the January-March period, the current account surplus amounted to $15.06 billion, off $7.27 billion from the first quarter of last year. The surplus in the goods account lost $8.88 billion from $19.28 billion to $10.4 billion on a rise in raw materials imports.

The BOK expected surplus streak to continue as exports go up despite risk elements such as supply setback, rise in raw materials prices, and economic slowdown in major countries.

Korea will likely incur a current account deficit temporarily in April, given trade deficit of $2.66 billion last month and dividends of companies with December settlement.