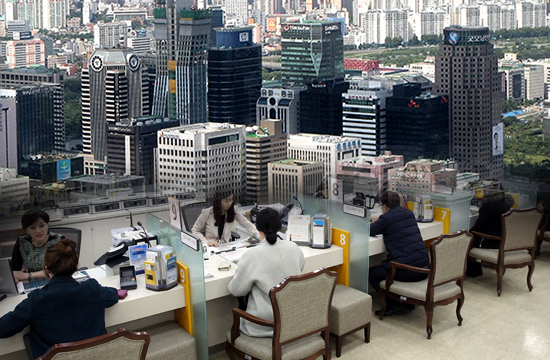 Hana and Woori Banks have seen on-quarter rises for the last three quarters. For Hana, the rate rose to 0.17 percent in the first quarter from 0.14 percent in the second quarter of 2021. In loan value, the amount rose 32 percent from 74 billion won ($58 million) to 98 billion won.

The delinquency ratio at Woori went from 0.14 percent to 0.18 percent during the same period while the loan amount jumped from 72 billion won to 96 billion won.

The delayed ratio at Shinhan added 0.01 percentage points in the first quarter to 0.15 percent.

KB Bank was the only bank with a quarter-to-quarter decrease. Its rate decreased 0.01 percentage points in the first quarter from the previous quarter’s 0.08 percent.

The overall delinquency rate in banking sector rose to 0.20 percent as of February from 0.16 percent in December.

The higher overdue ratio comes amid rise of 5.9 trillion won in the loans to self-employed and SOHO business this year.

Delayed recovery in private consumption has aggravated financial strains of small business owners and self-employed merchants. Although their debts are considered not bad due to the government’s aid for delayed repayment, they may go delinquent if economic downturn worsens.

As of the end of January, 133.4 trillion won of loans are under rollover or grace for repayment.

By Seo Jung-won and Jenny Lee