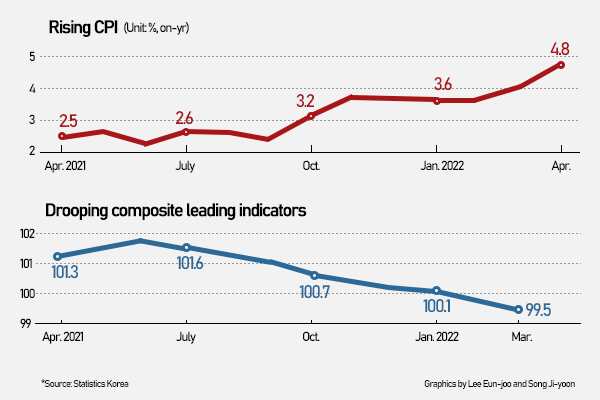 이미지 확대
There is just about three hours left until the stagflation alarm would go off for the South Korean economy faced with an inflation rate clocking towards 5 percent and annual growth rate slowing to 2 percent range, causing policy dilemma for the new government under Yoon Suk-yeol presidency.

According to a study by Maeil Business Newspaper and Korea Economic Research Institute (KERI) on weighted sum of 7 indices signaling movements of the economy and prices to gauge crisis alert level, the probability of South Korean entering stagflation has hit 68 percent.

Korea has entered a red zone in March based on a clock model that sets the conditions at the onset of the 2008 financial crisis as “midnight” or the trigger of a stagflation situation. The clock points to 8:06 p.m. for Korea.

Maeil Business Newspaper and KERI came up with an index to measure the stagflationary pressure to watch the buildup of economic movement towards the dangerous mix of an economic slowdown coupled with high inflation based on the movements of year-on-year monthly mining and manufacturing output and consumer prices.

Alarm zone has been divided into a scale of 1 to 6. The index has entered level 5 already in December.

High inflation and slowing economy have risen as a common global danger.

In its Commodity Markets Outlook report, the World Bank noted that strong food and energy prices aggravated by Russia’s invasion of Ukraine will continue for about three years, placing the global economy in greater risk of countering stagflation as in the likes of the 1970s.

“Possibility of a stagflation is growing as inflation rate nears 5 percent.”

Fiscal stimuli by a new government could worsen inflationary pressure and mitigate the effect from monetary tightening. 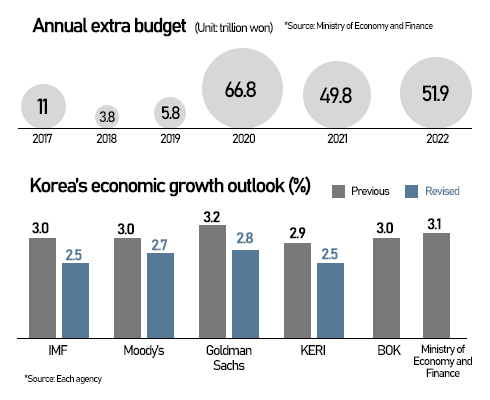 Experts are advising to push back the extra spending until October when inflation is expected to ease and save ammunition to stimulate a slowing economy.

Since consumer price index rose 3.2 percent in October, 3.8 percent in November, and 3.6 percent in December last year, the year-on-year inflation rate in the fourth quarter can ease to some extent from a base effect.

They also advise authorities to trot out financial aid to self-employed and struggling businesses through low loan programs instead of cash handouts to lessen the impact on prices.

“Although it can be difficult for the new government to scale back or withdraw campaign pledges ahead of June 1 local elections, the government must operate fiscal policy delicately,” said Hong Ki-yong, professor at Incheon National University.

Consumer prices rose 4.8 percent on year in April in the fastest gain in 13 years mainly due to the jump in import prices of fuel sources and grains.