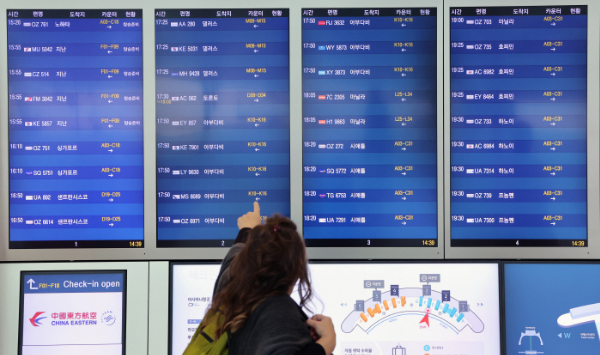 South Korea’s international air traffic increased 55.4 percent in a month last month as flights are being slowly normalized after two-year-long hiatus from pandemic.

According to the Ministry of Land, Infrastructure and Transport on Sunday, passengers traveling on international routes last month totaled 644,000, soaring 55.4 percent from a month ago and 259.8 percent from the same month last year.

Those flying on domestic routes jumped 27.1 percent on month to 3.14 million. Airlines in Korea flew a total number of 3.78 million passengers both locally and internationally last month, up 31.2 percent from the previous month.

International travel has been normalizing through lifting of borders and quarantine mandate.

The government announced earlier to expand the operation of international flights to 520 per week starting this month from 420 earlier.

Multiple virus check is a restraint to full recovery.

International travelers have to take PCR tests for at least three times at home and abroad for entry to Korea. All the tests cost about 1 million won ($784.62) for a family of four.

Unvaccinated travelers like kids and teens also will be required to self-quarantine for seven days, impeding the recovery in travel demand on routes to Southeast Asian countries, mostly enjoyed by families. Asiana Airlines has delayed resumption of its services to Da Nang, Nha Trang and Clark to July from June.

Jeju Air also has delayed the schedule for its service resumption on routes to Da Nang and Nha Trang to June from May.

By Lee Hee-jo and Lee Ha-yeon