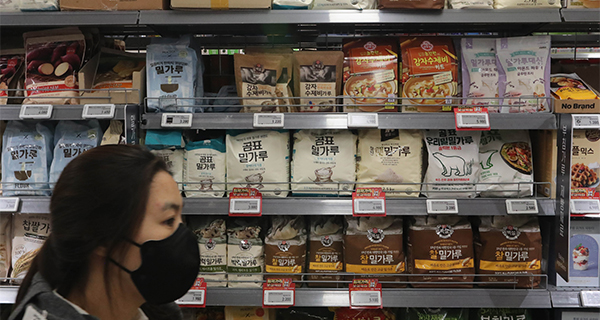 South Korean inflation already nearing 5 percent of the onset of financial crisis in 2008 will likely accelerate due to soaring food chain prices on top of falling self-sufficiency ratio on grains.

According to data from the Center for Agricultural Outlook under Korea Rural Economic Institute (KREI) on Sunday, the country’s unit import price index of grains for food is forecast to reach 171.7 in the third quarter, up 7.4 percent from the second quarter’s 159.9.

Import price index measures the price level of imported grains. The base year is 2015 with a benchmark figure of 100.

The index for grains for animal feeds that directly affect prices of livestock products is also forecast to jump 6.8 percent on quarter in the third quarter.

KREI had earlier projected grain import prices to surge 10 percent in the second quarter from the previous three-month period.

The import price index for food reached 100.6 in the first quarter of last year and for animal feeds 99.8. The index, however, is expected to soar more than 70 percent in less than two years.

Grain import cost accelerated due to the conflict between the world’s two primary grain and feed suppliers Russia and Ukraine.

The strengthening in prices is expected to last throughout the year.

“We are in a super cycle phase with supply shortage met with demand growth,” said Kim Min-soo, chief of Agscouter, an agricultural trade consulting firm. “The cultivation area of Ukraine, a major grain producer, will fall 30 percent and production 40 to 45 percent due to the war.”

The sharp surge in import grain prices is fanning inflationary buildup with the headline consumer price index at near 14-year high of 4.8 percent in April.

이미지 확대
Last month, the consumer price index for living necessaries gained 5.7 percent to an all-time high since August 2008 on a surge in food prices including those of beef (28.8 percent), chicken (16.6 percent), and bread (9.1 percent).

The prices of processed food and dining out also surged sharply by 7.2 percent and 6.6 percent each on higher import grain prices.

KREI estimated that a 10 percent increase in grain import price leads to a 3.4 percent and 0.58 percent hike in processed food and dining out costs in Korea.

According to data from Korea National Council of Consumer Organizations, raw materials account for an average 30 percent in major processed foods like ramyun and snacks.

The escalating has raised alarm for food manufacturers.

“We only have three to five month worth of grain reserves,” said an unnamed official from a food manufacturing company. “We can find substitutes, but this will lead to a rise in initial unit price due to a change in dealer that will lead to higher product price.”

Looking ahead, industry insiders called for Korea to come up with solutions to raise its grain self-sufficiency rate that has dropped to a record low. The rate shows production of domestic demand.

According to data from the Food and Agriculture Organization of the United Nations, Korea’s grain self-sufficiency rate fell to 19.3 percent in 2020, marking the first time for the reading to hit below 20 percent.