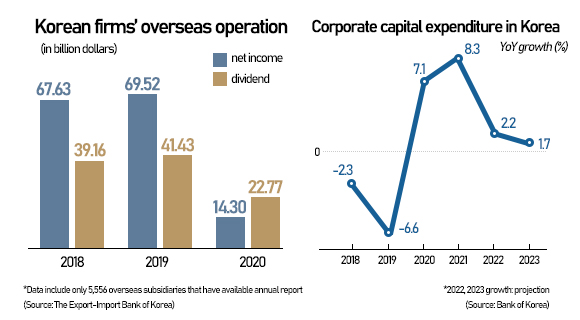 The new government is planning to sharply reduce or exempt taxes levied on a parent company for dividend income from its subsidiary located overseas, according to an official from the presidential transition team on Wednesday. The tax break will be proposed through the incoming government’s outline on revision of the country’s corporate tax system in hopes of driving economic growth.

Currently, 31 out of 38 members of the Organization for Economic Co-operation and Development (OECD) grant such dividend income tax exemption. Korea is among the only seven countries that give tax deduction only, alongside Chile and Columbia.

The Korean finance ministry reportedly is reviewing a plan to adjust a tax deduction rate for dividends that matches to granting tax exemption.

The presidential transition team estimates about $3.6 billion could flow into Korea if tax exemption is granted on dividend income from overseas subsidiaries based on the amount in reserves sitting at offshore units over the last five years. As of 2020, Korean companies were operating 5,556 subsidiaries, which generated $7.3 billion net income on average from 2016 to 2020 and paid out $2.3 billion in dividend to parent firms. This leaves $3.6 billion left abroad.

Korean companies suggest they would be able to expand investment at home on the additional tax incentives.

According to U.S FEDS Notes, about 78 percent, or $777 billion out of total $1 trillion that American multinational firms kept in reserves overseas have returned to the U.S after tax exemption was granted on dividend income from overseas units in 2018. Japan even saw 95 percent of Japanese firms’ overseas reserve capital return home since it exempted such tax in 2009.

Economists anticipate the more relaxed corporation tax rule to help boost capital expenditure at home. Machinery and facility investment in Korea is projected to grow only 2.2 percent this year and 1.7 percent in 2023, slowing down sharply from 8.3 percent in 2021, according to the Bank of Korea’s data, amid growing worries for the economic slowdown. Facility investment had declined 2.4 percent in the third quarter last year and 0.6 percent in the following quarter.