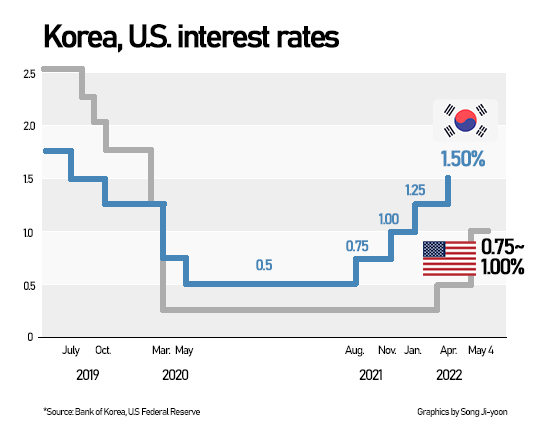 이미지 확대
South Korea’s central bank could be pressured to fasten and broaden rate hikes in line with multiple big steps in U.S. rates versus galloping inflation from supply disruptions across the globe.

The U.S. Federal Open Market Committee (FOMC) on Wednesday pushed up benchmark interest rate by half a percentage point – first such move since 2000 - to a range of 0.75~1 percent in the face of 40-year high inflation.

The Fed is rolling back holdings of treasury and mortgage-backed securities (MBS) by $95 billion from June 1.

When the U.S. rates are raised by another 100 basis points, it would go above Korea’s 1.5 percent, last raised in April.

Goldman Sachs forecasts the Fed fund rate to go up to 3~3.25 percent in the second quarter of 2023.

The Korean capital markets already rattled with heavy foreign selling of securities will be further shaken if the U.S. yields higher rates on top of strong dollar.

New Bank of Korea Governor Rhee Chang-yong has worried about higher U.S. rates that could further impact capital flight as well as interest and exchange rates to hurt economic fundamentals.

Widened rate gap in the two markets could further depreciate the won value against the greenback and make imports costlier to worsen trade balance and inflation, he said.

He would convene his first rate meeting on May 26. The next meeting is in July.

Global investment bank JP Morgan expected the BOK to raise interest rates four more times this year including one in May to bring the rate to 2.5 percent.

Consumers’ expected inflation for the following year reached 3.1 percent in April, the highest since April 2013.

Korean bonds have flattened around 3.3 percent on the mid-to long-term curve on expectations of bigger rate increases. The three-year government bond yielded 3.168 percent Friday morning, moving closer to the annual high of 3.186 percent. The five-year bond yield is at 3.370 percent and the 10-year at 3.399 percent.