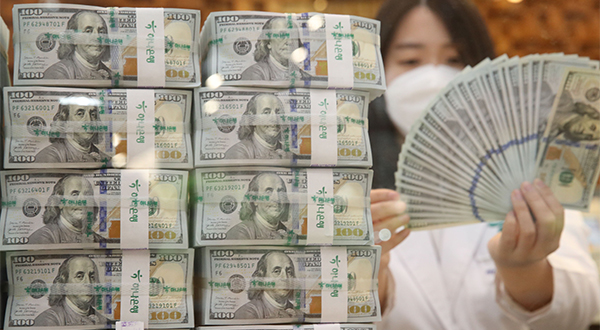 Korea’s foreign-exchange reserves fell by $8.5 billion in April to reach the lowest level in a year as strong dollar continued to cut the value of non-dollar assets on top of thinning current-account surplus.

The country’s forex reserves stood at $449.3 billion at the end of April, down $8.51 billion won from a month earlier, according to data published by the Bank of Korea on Wednesday. The foreign-currency deposits held by the central bank are the smallest since $452.3 billion in April last year.

It is the second month in a row for the country’s foreign reserves to decline. Korea’s forex reserves had been repeating ups and downs after touching record high of $469.2 billion in October, with declining pace accelerating in line with strengthening in dollar.

Stronger dollar has weighed on the value of assets held in other foreign currencies, such as the euro and Japanese yen, to cut down Korea’s forex reserves, explained the central bank. 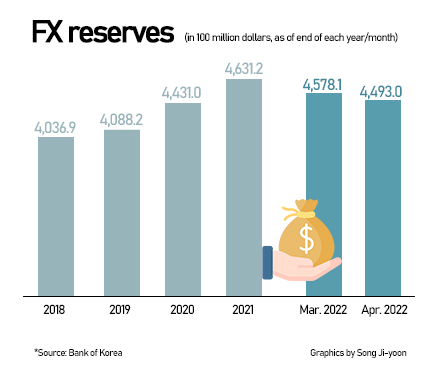 이미지 확대
The U.S. dollar index, which compares the greenback’s value against a basket of six foreign currencies - the euro, Swiss franc, Japanese yen, Canadian dollar, British pound, and Swedish krona – surged 6.0 percent on month to hit 103.62 by the end of April. This led the euro to depreciate 5.9 percent against the dollar, British pound 5.2 percent, and Japanese yen 6.8 percent.

The special drawing rights from the International Monetary Fund (IMF) fell $4.4 billion to $14.98 billion. The reserve position, or portion of required quota of currency held with the IMF that can be withdrawn, was down $1.3 billion to $4.45 billion.

Gold holding were unchanged at $4.79 billion.

As of the end of March, Korea was the eighth largest holder of forex reserves in the world.

By Park Dong-hwan and Cho Jeehyun