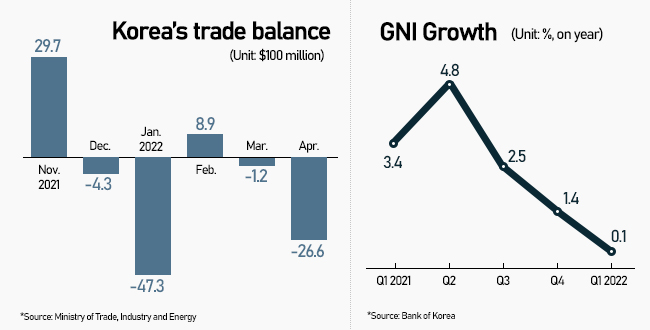 이미지 확대
South Korea reported deficits in its trade account for the last five months except for February with the red snowballing to near $3 billion in April as import costs from fuel to grains eclipsed over robust exports.

According to data released by the Ministry of Trade, Industry and Energy on Sunday, Korea’s trade balance logged a deficit of $2.66 billion in April in a yawning stretch from the red of $120 million in March.

Korea’s trade balance turned negative in December with a deficit of $430 million that widened to $4.73 billion in January. After a brief rebound to the black of $890 million in February, it delivered red in the following months as supply bottleneck and soaring commodity prices were accelerated by Russian invasion of Ukraine.

Korean imports totaled $60.35 billion in April, with the cost of energy sources – crude oil, gas, and coal – nearly doubled from a year ago at $14.81 billion.

Imports of agricultural products reached $2.41 billion in the month, unchanged from an all-time high of $2.45 billion in March mainly due to the surge in wheat and corn prices from supply shortages caused by the prolonged Russia-Ukraine crisis and drought in North America and Argentina.

Record exports of $57.69 billion for April were paled by galloping import cost.

It is the 18th month in a row for the country’s outbound shipments to grow since November 2020 and also the 14th straight month of a double-digit annual growth since March last year.

Widening trade deficit has cut into purchasing power, boding badly for much-awaited recovery in domestic demand after life has returned to normalcy from two-year-long virus restraint.

According to data released by the Bank of Korea on Sunday, Korea’s gross domestic income (GDI) added a mere 0.1 percent in the first quarter from the same period a year ago. Growth fell to the lowest level since a fall of 1.8 percent in the second quarter of 2020.

GDI is a measure of a nation’s economic activities and gauges a nation’s real purchasing power. Korea’s GDI fell sharply this year after reflecting trade loss.

BOK data showed that Korea’s net barter terms of trade index, which measures the number of imports that can be purchased with a single unit of exports declined 6.3 percent in March for the 12th straight month.