Korea’s factory growth picks up, but sentiment and outlook index in negative in March 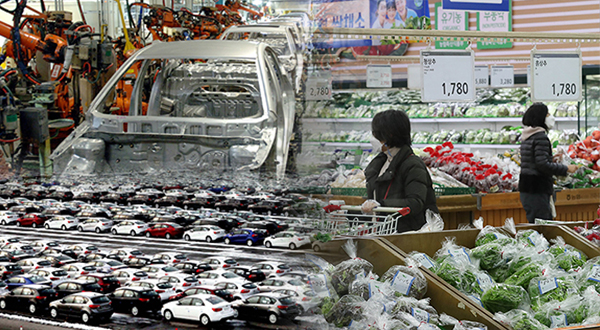 이미지 확대
South Korea’s factory output was bolstered by robust shipbuilding orders, while domestic demand dwindled and indices pointing to sentiment and outlook on the economy in the negative on higher inflation and interest rates.

According to data released by Statistics Korea on Friday, the seasonally adjusted mining and manufacturing output in March added 1.3 percent from the previous month, picking up speed from gains of 0.3 percent in February and 0.4 percent in January.

Manufacturing was aided by increased production in foodstuffs and non-ground transportation equipment led by LNG carriers that gained 7.1 percent and 11.3 percent, each, helping to offset a 2.3 percent fall in chip production, according to the data. Against a year ago, factory output gained 3.7 percent.

Overall industrial output including services activity in March gained 1.5 percent on month, returning to the positive territory after 0.3 percent fall each in January and February.

Hong Nam-ki, economy and finance minister, wrote on his Facebook page that the country’s manufacturing and exports are still the main driver for the country’s economic growth, and a rebound in service output is a positive signal.

But he remained cautious about the economic growth, citing the cyclical component of composite coincident index’s first fall below zero in March in six months amid growing uncertainty in economic recovery due to various external factors like high inflation and the geopolitical risk from the ongoing Russia-Ukraine war.

March service output rose 1.5 percent from the previous month. The arts, sports, and leisure sector lost 0.4 percent on month in March while finance and insurance rose 3.8 percent and wholesale and retail sector 1.2 percent.

Statistics Korea noted that despite the steady rise in sales of durable goods during Covid-19, demand for new replacements declined in March.

Facility investment slowed in March, falling 2.9 percent from a month ago, as spending on machinery fell 2.9 percent and automobiles and transportation equipment 3 percent.

The cyclical component of composite coincident index, which measures present economic activities, fell 0.2 point from the previous month to 102.4 in March. It was the first time for the index to turn negative after September last year.

The cyclical component of composite leading indicator, which predicts the turning point in business cycle, also fell 0.3 point to 99.5.