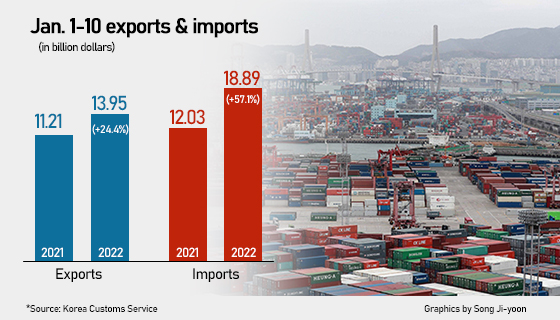 이미지 확대
South Korea’s exports stayed robust in the new year after a record-breaking 2021, gaining more than 20 percent in the first 10 days of January against a year ago on strong demand for mainstay chips, petrochemical products, and automobiles.

According to data released by the Korea Customs Service on Tuesday, the country’s exports from January 1 to 10 totaled $13.9 billion, up 24.4 percent from the same period last year. Daily exports jumped 14.8 percent on year based on 6.5 working days, 0.5 day longer than last year.

Exports of wireless communications devices, however, fell 51 percent during the same period.

Korea’s exports have remained strong, expanding on year for 14 straight months from November 2020 to December last year. The pace has been easing from December - 18.3 percent versus 24.2 percent on-year gain in October and 32 percent in November.