이미지 확대
South Korea was able to maintain its surplus streak for the 19th consecutive month in November, but the black sharply narrowed due to bigger rise in imports from soaring fuel cost, data showed.

According to the Bank of Korea Tuesday, the country’s current surplus stood at $7.16 billion in November, keeping the surplus streak for the 19th month in a row since May 2020. The surplus was reduced by $2.02 billion from a surplus of $9.18 billion a year earlier.

During the January-November period, the country posted a cumulative account surplus of $84.23 billion.

The goods account recorded a surplus of $5.95 billion, down $4 billion from a year ago due to stronger increase in imports driven by high crude oil and raw material prices. While exports increased by 27.1 percent to $59.65 billion, imports jumped 45.3 percent to $53.7 billion.

This was largely due to the 72.9 percent on-year increase in raw material prices with crude oil prices rising by 127.8 percent.

The service account registered a deficit of $140 million in November, a $840 million decrease in deficit compared to November’s deficit of $980 million from a year earlier. 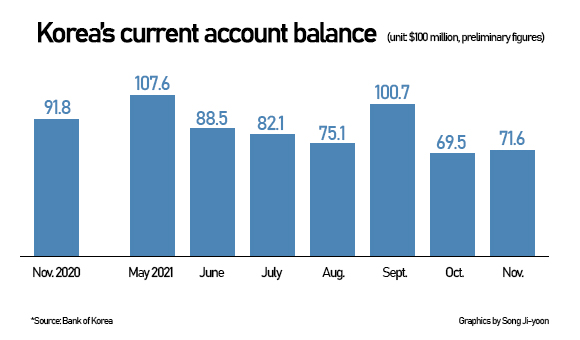 The travel account, however, recorded a deficit of $490 million in November, greater than $450 million from the same month a year ago.

Net assets in financial account increased by $6.54 billion in November.